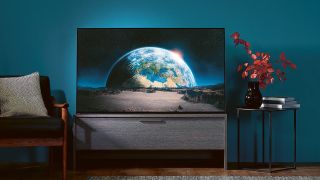 Technically, the size of your television should be a third of the distance between the screen position and your sofa, so if your couch is currently 13–14 feet away from your telly, good news – 55 inches is the perfect size for your layout. Of course, it doesn’t always come down to formulas; if 55 inches is your personal preference, that’s cool too, and thanks to the introduction of 4K, it’s now possible to sit a lot closer to your television without being able to pick out every single pixel.

So now we’ve got the importance of sizing out the way, let’s take a look at the specs you should be looking out for. The very latest TVs possess OLED technology, which offers an even clearer picture than the LED TVs that we’ve come to know and love. Samsung have also developed a new technology called QLED, which takes the traditional LED technology to a new level and delivers a picture that can rival OLED in quality. OLED and QLED TVs are the most expensive these days, which means you can pick up LED TVs for a fraction of the price that they used to be – good news for those looking for a bargain.

It’s fair to say that all recent televisions are Smart. However, there are slight differences between each of the interfaces, with the latest ones taking a giant technological leap forward. For example, older model Samsungs lack catch-up services but the latest QLED televisions feature both catch-up and game streaming so you can play PC games through the tele. The most common Smart TV system is an Android, and the latest versions even have in-built Chromecast so you can fire across your phone screen and view apps, games and music via your television screen.

Now we’ve covered the main things to look out for, we can take a look at the best 55 inch TVs on the market. We’ve scoured the likes of John Lewis and Currys to create a list that includes the most popular and technologically advanced televisions.Those who love the sound of a four and a half grand Samsung will be happy to know that John Lewis offer 0% APR finance deals so you can pay for your TV over time, interest-free. If you’re looking to buy outright, there’s some great LED TV deals, such as the Sony XBR-55X850E featured in the list below.

You may think that the £2799 RRP is steep but actually, if you’re looking for the latest technology, this is a perfectly mid-range price. Featuring the latest OLED technology, each pixel is self-illuminating, providing a picture that showcases deep blacks, dark shadows and scintillating colours. It boasts HDR technology, which delivers colour on a whole different level and thanks to its X-Reality PRO upscaling technology, the TV can boost the picture of your old DVDs by restoring any lost detail. Its Smart technology has received an update, too, with an intelligent search tool leading you to all the favourites and Youview catch-up. Built in Chromecast means you can beam your smartphone screen across to the TV, that means UHD apps (if compatible), photos and videos.

OLED technology, but slightly more friendly on the pocket

If you’re looking for OLED technology, this LG TV can’t really be beaten on price. You can experience true black, perfect colour and clear picture for a superior quality viewing experience for a lot less than our Sony offering. LG promise blur-free fast motion, making this tele a great choice for gamers and action film lovers. Thanks to the 4K resolution and support for features such as Dolby Vision and Technicolour HDR, the tele can also optimise streamed content such as 4K quality games and movies. Unlike the Sony TV, the LG supports Dolby Atmos, which works by creating a 3D field for precision-orientated sound, and is great news if you’re not looking to purchase a soundbar right away. The Smart function features all the old favourites, from Netflix to Freeview play, and you can even voice control it via The Magic Remote.

QLED technology is the rival to OLED technology and offers an equally as impressive picture, with stunning colour, high luminescence and incredibly real blacks as the focus. One of the most impressive features of the QLED technology is Q Contrast, which delivers extremely low light reflectivity and impeccable contrast in a variety of lighting environments; experts particularly commend the picture quality in bright lighting conditions. Thanks to the Q HDR and SDR technology, you can experience DVDs, games and television series how they’re meant to be seen, while the 4K upscaling boosts low resolution content to almost 4K quality for a superior viewing experience all round. With a curved screen, Samsung intend for the screen to wrap around your eyeline, which should create an immersive viewing experience.

LED TVs aren’t completely lost on us yet

If you can do without the exceptional, exceptional picture quality of OLED, a 4K UHD TV LED could be a perfectly welcome addition to your lounge. This Sony television features much of the same technology as its big brother at the other end of the list, including 4K X-Reality PRO technology which upscales bog standard DVDs and games to almost 4K quality. Thanks to Sony’s X1 4K HDR Processor and TRILUMINOUS display, you can still benefit from rich colours with smooth shading and contrasting - just not quite as contrasting as it’s OLED counterpart above. This Sony also possesses Motionflow XR 1000Hz, which ensures sports, action films and fast moving games are blur-free. The smart side of things is just as good, with all the old favourites, such as Netflix accessible, and the added bonus of Chromecast to fire your phone display across to the big screen.

The flatscreen little brother to our third pick

Although it shares plenty of similarities with its older brothers, certain compromises have been made to market this TV at a cheaper, broadly more accessible price bracket. Featuring similar technologies, including a QLED screen which boasts colour definition to rival that of OLED and HD/SDR upscaling to boost the picture qualities of old DVDs to pretty much 4K standard, you shouldn’t feel like you’re compromising on modern technology by purchasing essentially the cheapest tele in Samsung’s Q range. The only downside to the Q7, according to experts, is the black levels, which don’t match the slightly more advanced televisions in the range, and the operation of the Smart system isn’t as smooth as other OLED televisions from different brands. For the price though, there’s little to complain about.

So you're already in the process of upping your screen game, but what about the content? Take a look at our list of the best TV streaming devices to open up a world of options.