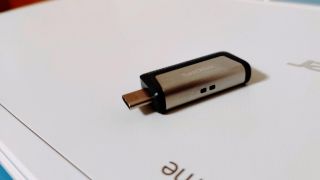 Good flash drives last for years and years and years; I still have working USB-A flash drives from high school kicking around in my drawers. That's why if you're going to buy a flash drive right now, I would highly, highly recommend opting for a USB-C thumb drive if you need some removable storage. USB-C also has the benefit of being compatible with your phone without needing to pull out any OTG adapters: just plug it in and move photos or files to the drive with a file explorer app!

SanDisk is one of the leaders in removable storage, and its USB 3.1 Type-C dual drive is hands-down the most reliable you can buy. It comes in 16-256GB models and features transfer speeds up to 150 MB/s.

The PNY Elite Type-C is available from 64GB up to 512GB, allowing you to store up to half a terabyte of movies, music, photos, or backup files compactly. There's no USB-A port, but that makes for a smaller package.

This single-port 16-128GB flash drive is an excellent option if you've already got a USB-C computer like a Chromebook or a MacBook. The drive slides along an open track, so it's easier for dust and lint to escape if they get scooped up by it.

Rather than including a keychain, the tiny 32-128GB Micro Duo is easy to stow in your gear bag or on your desk. The write speeds here are slower, but the read speeds are still more than enough for watching movies directly off the drive.

Available from 32-256GB, the Duo Plus only has a USB-C port while the other end houses a USB-C to USB-A adapter, which you can use with other peripherals. This USB 3.1 drive has transfer speeds up to 200 MB/s and has a 5-year warranty.

Double the ports, double the fun

You may notice that most of the drives on this list are multi-port flash drives, having a USB-C port on one end and a USB-A port on the opposite end. This makes the flash drive an extra-easy way for users to offload photos and files from an Android phone to their computer, even an older computer that doesn't have USB-C ports yet.

There's also another reason to like a dual-port thumb drive like the SanDisk Ultra Dual: Even if one port breaks — life happens — you can still use the functional port to get data off the drive before it breaks completely. Think of it as insurance!

That said, an extra port is also an extra point of failure, so if you want a Type-C-only flash drive, you can get a smaller or higher capacity drives, such as up to 512GB model available for the PNY Elite, which is tempting me greatly because it can hold so many movies for offline viewing during those long cross-country flights.

A note about read, write, and transfer speeds

Now, when looking at flash drives, you'll see a lot of USB versions thrown around and a lot of talk about how fast a drive is. Now, like microSD cards, most flash drives are advertised for a transfer speed, which you should always transfer to read speed, not write speed. Practically all external storage devices have a lower write speed than read speed, sometimes significantly lower write speeds. Unlike say microSD cards, however, USB drives don't get covered in speed classifications like V30 or U3.

When you look for a flash drive, higher write speeds are important if you're constantly copying over large data files, but so long as most of the time you're transferring smaller files or just reading files that have been on the drive for a while, any USB 3.0 or USB 3.1 drive should be perfectly fine.