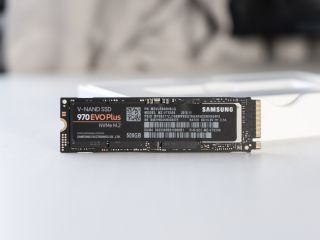 SSDs vary greatly when it comes to price and performance, but there are some that prove better than the rest for most users. The Samsung 970 EVO Plus is genuinely pushing the boundaries of performance for your buck right now for consumer SSDs, and it's impossible not to recommend.

Insane performance at an affordable price

Samsung has long been at the forefront of the SSD market, and its latest is undoubtedly the greatest with incredible performance.

Samsung did something incredible with the 970 EVO Plus, offering performance that matches (even supersedes) the 970 PRO but without the insane price tag. The 970 EVO Plus is based on Samsung's latest 96-layer V NAND memory, and with the series starting at an affordable price for the 256GB storage capacity, this is an extremely enticing SSD.

Read and write speeds are 3500 MB/s and 3300 MB/s, respectively. It's super fast. Numerous 970 EVO Plus features match other Samsung NVMe SSDs, including the 5-year warranty and overall endurance of the drive. Where this little black stick differs is in its performance, if you're chasing the fastest write speeds possible, this is the one for you.

The only downside to the 970 EVO Plus is the requirement of an M.2 slot, which not everyone may have available. Modern motherboards will usually come with one to spare — the same with a notebook — but you'll need to double-check you have a slot ready for this speedy SSD.

Performance you need at a great price

The 860 EVO series is Samsung's best-selling solid-state drive (SSD) family, and rightfully so with fantastic value.

You can do much worse than Samsung memory. The company's storage solutions are viewed as some of the best in the business. It's also why we selected a Samsung SSD as our best overall option here. There's a 5-year warranty on each 860 EVO, and new owners will be able to enjoy up to 550MB/s read, and 520MB/s write speeds.

That's not too bad for a SATA SSD. Capacities include 250GB, 500GB, 1TB, 2TB and 4TB. While Samsung's SSDs may be slightly pricier than competitor's alternatives, you've got to remember the company states you'll be able to use these drives for far beyond five years. And that's backed with the extended warranty from the factory for each drive.

SanDisk SSD Plus is the go-to choice for anyone upgrading from a mechanical drive on a tighter budget.

Moving up from a mechanical HDD to an SSD like this option from SanDisk is a great way to improve the responsiveness and overall performance of your laptop or desktop PC. SanDisk strikes a balance between performance, reliability, and affordability with the SSD Plus series, starting at a budget-friendly price.

You don't lose too much because of this, racking up speeds of 530MB/s and 440MB/s for read and write, respectively. It's not quite as fast as drives from other manufacturers, like the Samsung EVO series, for example. But for the price, you're getting a solid SSD from a reputable brand — SanDisk also makes some great SD cards.

To top all this off, you can enjoy a three-year limited warranty. Just don't expect to be able to buy a model greater than 1TB as this capacity is as high as you can go.

WD took full advantage of 3D NAND technology and came up with the latest iteration of Blue SSDs.

Sporting 560 MB/s and 530 MB/s for read and write speeds, the Western Digital Blue SSD series offers excellent value. Not only do you have a choice of capacity for 2.5-inch drives, but there are also M.2 modules to choose from as well, depending on what slots you have available on the motherboard.

Against other SSDs with similar technology, you'll not notice much improvement, if any. Compared to older SSDs, there is a noticeable improvement in loading times for software and games, and against an HDD is a no-brainer result. Should you have an SSD or few already with similar speeds, you'll likely not get much out of picking up the WD Blue.

However, should you currently be using an HDD for games or an older-generation SSD, the WD Blue series is worth considering. Pricing also isn't out of this world, allowing you to pick up a 500GB and 1TB version at better price points than competitor drives. You can even go up to 4TB if you need the extra flash storage capacity.

Seagate's IronWolf NAS SSD is what you'd expect from flash storage in a server environment.

If you happen to be running a server on your Windows 10 PC or need to use an SSD that's designed for 24/7 operation, the Seagate IronWolf 110 SSD range is just what you need. A NAS is typically made up of NAS-specific mechanical HDDs that are designed for continuous operation, but now vendors are looking at SSDs too.

This range from Seagate will deliver sustained data rates up to 560MB/s (far beyond what NAS HDDs can achieve) and come rocking some of the same technologies like DuraWrite and AgileArray firmware technologies for enhanced reliability and endurance for 24/7 operation and multi-user environments.

Depending on the available budget, we'd recommend the Samsung 970 EVO Plus because it's lightning-fast. You get not only great read and write speeds, but also a 5-year warranty, high endurance and reliability, and a choice of capacities.

If you can't justify paying out the rather hefty price required, our alternative picks are worth considering. When you want to go all out with the latest technologies and enjoy the fastest read and write speeds around, Sabrent has you covered with the blindingly-fast Sabrent Rocket.