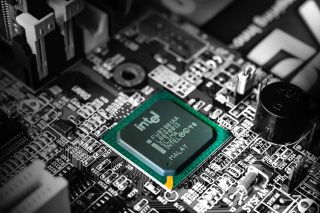 The motherboard is the heart and soul of a PC, be it a laptop or desktop. You need to ensure you're getting the most out of your purchase when used alongside other components and the ASUS ROG Strix Z390-E from ASUS for Intel and ASUS ROG Strix X470-F for AMD are excellent options. Here are some others you might want to check out.

The ASUS ROG Strix X470-F is a cracking motherboard. Not only does it support the latest Ryzen 3000 CPUs from AMD, but the board itself is equipped with everything you need to build a reliable, stable PC with amazing performance with plenty of room for overclocking.

ASUS uses high-quality components with this motherboard, which is incredibly important when it comes to capacitors and other circuitry. We noted the solid rear port setup, which consists of eight USB ports (five USB 3 Gen 1, two USB 3 Gen 2, and one USB 3 Type-C Gen 2), Ethernet, HDMI and DisplayPort (for Ryzen processors with integrated GPUs only).

You've also got RGB connectors, PUMP header for water-cooling, two M.2 slots, plenty of SATA, and enough PCI slots to install all your favorite sound cards. It's not a budget motherboard, but you do get a lot for the money here. Because it's not built on the newer X570 chipset, you'll miss out on PCIe 4.0 but avoid having to pay a premium.

ASUS makes some great motherboards with one of the best BIOS on the market, and the ROG Strix Z390-E is no exception, sporting everything you need for a capable, high-end PC. You've got numerous ports, multiple M.2 slots, and enough RAM slots to run Minecraft comfortably.

The only downside to this board is the lackluster overclocking performance. You should be able to get more from all your Intel CPUs, but expect to see some severe heat being generated at the VRM areas thanks to ASUS opting for a 4+2 phase design, instead of usual 8.

This may be a B450 motherboard, which was released with full support form Ryzen 1st and 2nd Gen CPUs, but ASRock made it so this board can take even the third-gen Ryzen 3000 processors. You'll be able to throw a Ryzen 9 3900X into this thing and call it a day, so long as the BIOS is up-to-date.

Because this is a budget motherboard, you will miss out on numerous features. There's not PCIe 4.0, only six PCIe 2.0 lanes, no SLI, only four USB 3.x ports, three SATA lanes, but there's plenty to love about this ASRock motherboard, including decent components for stable computing.

The Z390 UD is an excellent option from GIGABYTE that gets all the basics right with the Z390 Intel chipset. It's also an affordable motherboard, not that you'd notice with the solid design.

You can check overclocking support, support for up to 9th Gen Intel CPUs, passive cooling for the VRMs (which is important), and an affordable price tag. You even get Thunderbolt 3!

Just don't expect to throw in multiple NVIDIA GPUs onto this motherboard as there's no SLI support. In fact, expansion is a little on the limited side compared to other motherboard options for Intel processors.

Like ASUS, MSI makes some super motherboards with great BIOS to go with them. This makes it easy to customize the PC to your liking, depending on the processor installed, cooling, as well as what sort of performance you want to enjoy.

This MEG Z390 ACE motherboard comes rocking thick VRM cooling heatsinks that should help with heat dissipation when under load, as well as Killer LAN and support for up to 9th Gen Intel processors.

Some owners have complained about the M.2 slot with heatshield. The issue is a preinstalled mounting standoff that needs to be removed if you have a double-sided M.2 PCIe SSD since it's a little on the large side. MSI doesn't provide clear instructions on removing this standoff, which causes problems.

You don't need the most massive motherboard you come across to build a great PC. Smaller form factor cases are handy when you want to keep the overall dimensions of the PC low, and a Mini-ITX motherboard will help with this.

As well as being physically smaller than ATX or Micro-ATX motherboards, you retain a full PCIe slot with the B450I Gaming Plus AC from MSI, can install an M.2 SSD, throw in up to 32GB of RAM, and the latest Ryzen 3000 CPUs.

That's right; you could install the Ryzen 9 3900X into this motherboard and have a small PC powered by 12 cores and 24 threads, because why not?

Small form factor cases usually take Mini-ITX motherboards, which when compared against ATX boards are _tiny_. ASUS managed to pack many features onto the ROG Strix Z390-I Gaming, including plenty of RGB and even two M.2 slots.

You also get full support for up to 9th Gen Intel processors, and there's plenty of ports and headers to play with, allowing you to hook up a powerful GPU, all your storage devices, and much more.

Just expect to pay out a fair chunk for the liberty of using a smaller platform.

Our top pick for Intel is the ASUS ROG Strix Z390-E and ASUS ROG Strix X470-F for AMD. Both of these top motherboard recommendations come with everything you need for a cracking PC build, including high-quality, reliable components, plenty of expansion options, and so much more.

The two best motherboards for either platform also allow for you to get much more from the processor than what's available from the factory, mostly with the included software handling everything for you. Other recommendations in our collection include solutions for enthusiasts, Mini-ITX builds, and those on a tighter budget.