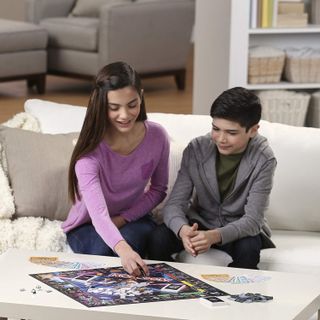 Star Wars is a legendary entertainment franchise when it comes to films, but that fame extends far beyond the realm of cinema. Star Wars books, shows, toys, and board games have proven immensely popular all around the globe, and the latter is a great way to have fun with your friends while pretending that you're in the Galaxy Far, Far Away. Here are the best Star Wars board games we recommend.

Star Wars: X-Wing is a two-player tabletop game that brings the thrill of starfighter dogfighting to the dinner table. Included dials and templates make executing moves a breeze, and there are tons of different tactics you can employ in order to shoot down the opposing player. It can get expensive as you buy more pieces, but the base set is a great start.

The two-player Star Wars: Armada takes the formula of Star Wars: X-Wing and scales it up to Imperial Star Destroyer and Rebel Alliance frigates, allowing you and a friend to experience what it's like to captain iconic Star Wars warships.

Star Wars: Rebellion is a 2-4 player game that spans the entire Star Wars galaxy. The Empire and Rebellion are in open war, and the team that coordinates troop movements, controls the most territory, and uses their ships more effectively will defeat the opposition.

Star Wars: Imperial Assault is a long-lasting tactics game where one team controls the armies of the Empire while the other controls an elite Rebel strike team. The full experience contains 30 missions, meaning the game will entertain its recommended 2-5 players for days or even weeks.

Star Wars: Empire vs. Rebellion is a simplistic, yet engaging two-player Star Wars card game that anyone can pick up and play, making it excellent if you don't want to think too hard and just have some fun.

VIEW AT AMAZON
Back to the classics

The 40th Anniversary edition of Star Wars Monopoly takes 2-4 players on a nostalgic trip through beloved moments from the first film, A New Hope, as they compete to own the galaxy in Monopoly fashion — with some Star Wars twists.

VIEW AT AMAZON
Challenge the brain

Star Wars Trivial Pursuit is a trivia game for 2-4 players that makes you answer questions about the Star Wars universe, which can range from very easy to extremely hard. If you like having your brain challenged, or just want to show off, this is the game for you.

Star Wars Risk offers a simple and easy strategy experience anyone can play, as two teams of 2-4 players duke it out in an epic space battle above the moon of Endor.

If we had to choose

All of these board games are fantastic which makes it hard to recommend just one. If you're a fan of deep strategy, the large scale and complex systems of Star Wars: Rebellion will be perfect for you.

If you're looking for something on the simpler side, though, Star Wars: Empire Vs. Rebellion is a great bet. It's an easy way to just pick up and play something on Star Wars Day without having to spend hours reading instructions or learning rules.