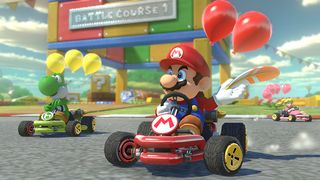 Racing games are some of the most fun you can have on a console. From realistic games that require skill to master, to family favorites like Mario Kart that let you fling ridiculous power-ups at your friends, Nintendo Switch has a robust offering of great racing games that shouldn't be missed. In a move that should surprise nobody, Mario Kart offers the best possible experience, but it isn't the only awesome racing game you'll want to get your hands on.

Prime
$50
View at Amazon
$59.99
View at Best Buy
$59.99
View at Newegg
See all prices (16 found)
235 Amazon customer reviews
☆☆☆☆☆
Best Overall
New courses to race
48 different races to enjoy
Playing on Switch is fun and easy to pick up.
No course will be difficult for seasoned players

Mario Kart is easily one of the most popular games that Nintendo has ever put out. Mario Kart 8 Deluxe takes everything that has always been fantastic about this franchise and makes it even better. The driving controls got a major update and have been fine-tuned for the Switch. You can now easily powerslide through turns to overtake other racers, even if you've never played a Mario Kart game before. It still requires a combination of luck and skill to win, which means even if you're playing your favorite character, victory is never assured.

Mario Kart 8 Deluxe offers up 48 different tracks in a variety of terrains, including underwater portions. You'll see old favorites like Toad's Turnpike, and Twisted Mansion, but there are tons of new ones as well, like Water Park or Cloudtop Cruise. 3DS players will also recognize several of the tracks. Each one offers up their own pitfalls, and it'll take time to master each one.

When you first start Mario Kart 8 Deluxe, you have access to all of the tracks and characters (except one), including content that was originally part of DLC pack's back on WiiU's Mario Kart 8 in 2014. There are also a number of new characters for you to check out. There are now 48 different playable characters and the only one locked from the get-go is Gold Mario. This means you can now play as King Boo, Dry Bones, Bowser Jr. and even the inklings from Splatoon.

However, in order to access the best karts, you'll need to play some races. Winning races gives you coins, which you'll use to unlock various parts and karts. You need those parts to upgrade your kart for maximum efficiency when you're on the track. Along with all of the parts and karts that were available in Mario Kart 8, there are three new kart bodies that have been added for Mario Kart 8 Deluxe. You can also play online with friends or random players from the internet and it's a smooth process. Trying to find races is never particularly difficult, and lag doesn't seem to be an issue that it struggles with.

Overall, Mario Kart blows the competition right out of the water. They deliver a superior experience combining nostalgic races and aspects of gameplay with new tracks, customization options, and characters. No other racing game on Nintendo Switch manages to deliver the full package with as much grace and aplomb as Mario Kart 8 Deluxe does.

$6.89
View at CDKeys
Prime
$14.99
View at Amazon
$33.99
View at Best Buy
See all prices (10 found)
65 Amazon customer reviews
☆☆☆☆☆
Best Physics Defying Races
Gorgeous and exotic tracks to race
Passive and aggressive powerups to juice up your vehicle
14 different cars to race with
Steep learning curve to stay on track with different cars
You may fly off the edge of tracks until you get the hang of the physics system

Grip: Combat Racing delivers an experience unlike any other racing game on Switch combining fast-paced races with serious combat. You're able to hit speeds above 700MPH, allowing you to roll along roads, walls, ceilings, and anything else your tires can grip onto. The game has 4 different planets, with 22 different tracks, 9 unique power-ups, and 14 different armored cars to choose from.

Grip delivers a fast racing experience that combines fun physics with plenty of combat between racers on the track. There are a variety of modes to play with from Deathmatch and Elimination to Speed Demon and Classic Ultimate. Each mode offers a different variety of gameplay, and players who used to love the Wipe Out series will have a ton of fun. Each race is its own adrenaline-fueled thrill ride, and you never have to follow the exact same route. Each one is littered with powerups like shields to protect you from enemies and boosts to speed. You also don't need to take the same exact route every time, because there are options for traversing the walls and even the ceiling. Provided you're moving fast enough that is.

Grip also gives you the option of 14 different armored cars to race with. Each one has its own pros and cons, many of which are related to the physics system. Since each car has its own weight, you'll need to spend time with each one to get the hang of how it handles in order to use it best. Otherwise, you may attempt to take a turn and go flying off the course, which is never a good time.

Prime
$33.25
View at Amazon
Prime
$49.99
View at Amazon
See all prices (3 found)
155 Amazon customer reviews
☆☆☆☆☆
Best Realistic Racing
Robust Career Mode with its own storyline
250 different races
50 real-life cars to race with
Lag on button presses in menu and on the track
Steep learning curve for each car
Handheld mode can be especially choppy

Many racing games deliver a lot of fun without much realism to back it up. Gear.Club Unlimited 2 isn't one of those. It gives you 50 real-life cars and lets you race through over 1800 miles of track and 250 individual races. Along the way, you can customize your vehicles, and build a club with friends to challenge other clubs for the glory of being top of the leader boards. It also includes a story mode for players who want more than just random races, and the ability to play in 4-player split screen with friends.

The first place that Gear.Club Unlimited 2 really shines is the career mode. You start out as a test driver thrown into the driver's seat at the last moment, and your racing career zooms along from there. There are 250 different races for you to drive through, and depending on how you finish you'll earn in-game money. However, there are no microtransactions to gunk up the works, which is an awesome change from some other franchises. You'll use that in-game money to buy different cars, and there are 50 that will unlock through the game, including a Bugatti Veyron Grand Sport and the Porsche 918 Spyder towards the end.

To upgrade the cars that you purchase, you'll need to enter the garage. This ends up feeling a bit disconnected, rather than having a simple menu where you can get everything done at once. You'll have to buy and place various different workshops in your garage, and each one is used to upgrade a different aspect of your car.

It's the gameplay mechanics themselves that keep this from being an absolutely excellent game. Choppy graphics at inopportune times and lag on button presses can be infuriating when you're in the middle of a race. While you do get used to them after a while, they take away from what is otherwise a great racing game with an emphasis on realism.

There aren't many arcade racing games around these days and that's where Horizon Chase Turbo shines. It offers up 12 cups, 48 cities, 109 tracks, 31 unlockable cars, and 12 upgrades. You can play with friends and recapture that sweet 90s nostalgia all from the comfort of your couch.

The biggest play mode on Horizon Chase Turbo is the world tour. You get access to 100 different courses in a dozen different regions including America, China, and Iceland, to name just a few. Each track has its own feel, and the graphics while retro are beautiful with green grass and bright blue skies. You don't need to win each race in order to progress, but there is significant replay value. Snagging the blue tokens littered across each course and finishing in 1st place unlocks a special cup. If you do it on every course, there is even a special car waiting as a prize.

There are also different modes of play like Championship, Endurance and Playground modes. Some of which will need to be unlocked by winning the World Tour. While there isn't an online mode, you can play multiplayer locally with up to 3 other players for split screen fun.

All of these games are fantastic and fun picks, but our favorite amongst the bunch is definitely Mario Kart 8 Deluxe. It delivers tons of fun alone or with friends and brings a healthy dash of nostalgia paired with updated graphics, gameplay and mechanics.

Whether you've been a fan of Mario Kart for years, or you're new to the franchise it's easy to jump in and start burning rubber. With dozens of characters, options to customize your Kart to peak efficiency and plenty of new tracks to memorize you don't want to sleep on this one. It's absolutely the most fun you can have with a racing game on Nintendo Switch.