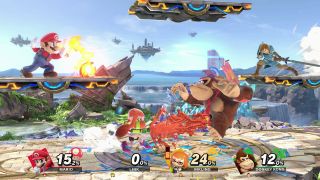 Fighting games are a genre that is built to be played with friends as you pummel each other off of platforms and across a variety of different levels. From classic options and anime-inspired games to fighting with Pokemon in tournaments, Nintendo Switch has some great options that any gamer can enjoy. Out of all the options available, the absolute best is Super Smash Bros Ultimate. It delivers a fun experience with easy to pick up controls, tons of characters and plenty of content to unlock and enjoy.

Super Smash Bros is what happens when you take a game built around having all of your favorite video game characters beat each other to a pulp. Ultimate has more content than any other game in the franchise with more than 74 different characters for you to unlock and a whopping 108 different maps to try out.

Controls in Smash are part of what makes the game so approachable. You only have two buttons that you'll be using, along with the control stick. Different characters have special moves that you trigger during combat, but the basics are the same across the board. It means that even players who aren't used to fighting games can jump right in and start having fun.

One of the ways that Smash stands out from other games in the genre is a complete lack of health bars. A percentile appears above characters as they get hit and once it goes high enough you can get KO'd and knocked off-screen. However, the lack of that health bar does make the game seem friendlier to new players and folks who aren't usually button mashing in fighting games.

Overall, Super Smash Bros Ultimate delivers the best possible fighting experience on Nintendo Switch. It's got easy to pick up mechanics, great graphics, and tons of options for characters to unlock and levels to master. If you love fighting games, then this is definitely the one you don't want to miss.

Street Fighter was one of the first franchises for fighting games that caught the attention of gamers, long before there were consoles in every home. Now you can experience all of the games in one excellent package with the Street Fighter 30th Anniversary Collection. This isn't a remake either; these are perfectly captured games as you remember them — for better or worse.

The Anniversary collection includes 12 classic games starting from the original street fighter. Each one has been emulated in its original form. This does mean there aren't any meaningful updates to games in terms of mechanics. However, there are new options for the way the games look, letting you take advantage of old school arcade looks or widescreen graphics that fit better on more modern televisions. You can even load up multiple switch console and go head to head with friends, or check out online play to compete against other folks.

For years the only real way you could play Pokemon games was with a handheld game system. Now you can square up with Pokemon in a full tournament using your Nintendo Switch with Pokken Tournament DX. This is a beautiful blend of fighting games like Tekken with the Pokemon you already know and love, and it is filled with features you'll come to love.

Pokken Tournament DX offers up an experience that takes cues from a variety of different fighting games to deliver a wholly unique experience. There is a field of battle that shifts between various stages depending on what is going on and ensures that you're thinking strategically even when in the throes of a great battle. There are also more than 16 different Pokemon for you to fight with, and they all look amazing thanks to some excellent graphics.

Mortal Kombat has been one of the premier franchises when it comes to fighting games for more than 25 years. With an experience that combines action, a fun story, great graphics and over the top finishing moves. Mortal Kombat 11 continues this trend with new updates to fighting mechanics, and a full tutorial that makes the game better than ever before.

The first thing you'll notice is the update to graphics which are cleaner and sharper than ever before. It means it's easy to gauge distance and pull off some great combos. Combat mechanics have also received a pretty substantial update to combos. There are also new Krushing moves that add a layer of complexity to fighting, and a full tutorial mode that explains every aspect of the game.

Dragon Ball FighterZ brings one of the most popular anime series in the world back to consoles with a new fighting game. From the moment you boot up this game, it's like watching frames of the actual show. This 2D fighter has 24 different playable characters and brings DBZ to consoles successfully.

As you fight, you'll be able to pull off wild combos including full-blown aerial attacks you can string together. When you land combos wild blasts of color fill the screen. The actual fighting is fast and frenetic, which means if you aren't a massive fan of the anime, this is a fighting game you can enjoy. Its got a decent roster as well, allowing you to play as fan favorites like Android 21 or Vegito.

Nintendo Switch has an excellent roster of fighting games, including entries that you won't find on other major consoles. Whether you want the next installment of Mortal Kombat, or you want to try something completely new, there is a game here that will capture your attention. Out of everything available the best is Super Smash Bros Ultimate.

This game delivers a stellar experience from the first moment you boot it up. With over 50 different characters, easy gameplay mechanics, awesome graphics, and 108 different levels to play, there is tons of content here to explore. It's a ton of fun whether you are playing by yourself, or competing against friends to see who can survive the longest.