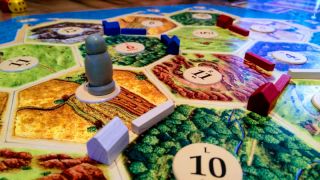 Video games are more popular than ever, but nothing beats an old-fashioned board game. Sitting down with friends and family to play Connect 4, for instance, never gets old—and it's perfect for every age, too. If you want a board game that the whole family can enjoy, we have some classic suggestions that never seem to go out of style.

Reach King Kandy's castle where delicious surprises await. Candy Land is easy to understand and even more fun to play. Featuring colorful cards, a vibrant board, and four gingerbread pawns, this sweet version of the classic is great entertainment, especially if you have younger kids.

This is a classic that will never go out of style. The concept of Connect 4 is simple but mastering the skills and strategy to win takes dedication and planning. If you've never played Connect 4, you'll be surprised by how competitive and difficult the game can be.

Designed for four to eight players, Codenames pits two teams of spies against each other. These teams must attempt to contact their undercover agents while avoiding assassins. It makes for a suspenseful and lighthearted game with high stakes.

Visit Site
Does he have a beard?

The original guessing game challenges players to guess each other's mystery character by using the process of elimination. With 48 face cards, two game boards, and 24 mystery cards, there are a lot of possibilities.

Don't get in trouble of your pegs will have to move back. With support up to four players, Trouble features a "pop-o-matic" die roller, colorful pegs, and a thrilling race around the board. This game is so popular that there is even a world championship.

In Scrabble, players put down their tiles to form words. Every letter counts, so no word or vocabulary is too small. And, yes, according to the Merriam-Webster dictionary, Trooz is an acceptable Scrabble word.

Winner of the "Game of the Century award," Catan challenges three to four players to build, develop, and trade their way to the top. The goal is to build the most thriving settlements in 60 minutes, which in turn earns players points. If you have the most points when the timer expires, you win. There is even a five to six player expansion for more fun with bigger families.

Visit Site
In the library

In Clue — called Cluedo in Europe — players must guess the murderer by eliminating suspects and discovering clues. The classic mystery game features a new character, Dr. Orchid, and all the clues, characters, rooms, and more to figure out the mysteries of the mansion.

Gather around the table

There's something so timeless and engaging about an old school board game. It reminds me of growing up. I played a lot of Clue when I was little, and I'll never forget about Guess Who?

If there's one game you absolutely must play, it's Candy Land. From its vibrant design to its simple rules, Candy Land is a fantastic board game that offers hours of entertainment and is easy enough for all ages to understand, making it a great game to play with parents and children.

Whether you're an adult or just entering middle school, these board games are great fun for all ages.