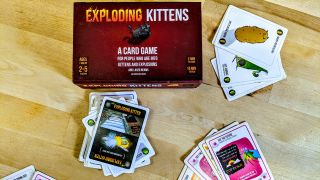 From Solitaire to Bridge to Gin Rummy, card games are as old as time itself. But these aren't the same classic card games your grandparents grew up playing. On this list, you'll find more contemporary creations that take entertainment to the next level. Forget Super Smash Bros., these card games will elevate your party to the next level.

"A card game for people who are into kittens and explosions and laser beams and sometimes goats." That's all you need to know about this card game, which remains one of the most-backed Kickstarters ever. See what the fuss is about and have your wildest dreams come true by rubbing the bell of a Pig-a-corn.

This expansion to Cards Against Humanity contains 300 (255 white and 45 black) of the strangest, weirdest cards you'll ever see in a party card game. The game, which also rose out of Kickstarter, requires players to complete fill-in-the-blank statements with words or phrases that are typically deemed as offensive.

How good are you at telling a story? The Awkward Storyteller challenges players to come up with the most creative and ridiculous stories. The game isn't meant to be competitive, but rather a source of inspiration and humor as players come up with their own original tales and plot twists.

Watch Ya Mouth has gained national attention for its laugh out loud premise. Players put the cheek retractors in their mouths and then say phrases like "Warm Beef Meatballs." The discrepancy between what you're supposed to say and what is actually said will have you laughing until tears are streaming down your face.

"What Am I?" That's the question at the heart of Hedbanz Game, a fast-paced question game where players need to figure out who they are. By asking yes or no questions, players guess if the cartoon on their head is an animal, food, or man-made object. This game is perfect for families with kids.

"A party game for devious people" is the tagline for Werewolf, where players lie and cheat to get ahead. Up to 35 people can play Werewolf at once, making it the ultimate party game for large family gatherings. Are you willing to lie to keep your secret as a werewolf safe?

You've played Monopoly, now play Monopoly Deal, the card version of the classic board game. Like the board game, players collect and swap properties and charge other players rent as they work their way toward becoming a real estate mogul. You just don't have to deal with all those pieces!

Make the most out of game night

Kick your obsession with the digital and get in touch with something more tangible. These card games push us further away from screens and into the tabletop arena, where you have to interact with people face to face.

There's such a wild and impressive variety of card games available right now, from your classics to your Kickstarter superstars, making it a great time to get together with friends and family for a good old fashioned game night. For fun and weird time, check out Exploding Kittens and see why it's such a darling in the card game world.

I know mobile games are all the rage, but card games never go out of style.