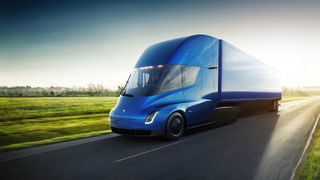 It's time for another batch of daily tech news, courtesy of our friends at TechRadar: we've got updates on the soon-to-be-launched Google Pixel 3 XL, LG V40 ThinQ and Sony Xperia XZ3, as well as news on the Tesla Semi truck and the 2018 iPad Pros expected from Apple.

Since a batch of Google Pixel 3 XL phones hit the black market in Russia, we've been seeing images and videos of the handset shown from all angles, and the latest unboxing video is one of the most comprehensive yet – if you want to see the upcoming Google phone in a professional, high-resolution clip, check out the footage by following the link below.

Next up in today's batch of phone leaks we have renders of the LG V40 ThinQ, from two trusted online sources – so these are likely to be accurate. You can see the phone's front display notch, and the three-lens camera array on the rear. We're expecting a 6.3-inch screen on the LG V40 ThinQ, while the official unveiling has been tipped for September.

3. The new iPad Pros might support keyboards in vertical mode

We're expecting Apple to unveil some new iPad Pro models before the year is out, and a mysterious-looking case that's appeared online has us asking some questions about these upcoming tablets – a cut-out down at the bottom suggests the 2018 iPad Pros might support keyboards even when they're positioned vertically, which would be interesting.

4. Here's another good look at the Sony Xperia XZ3

The leaks continue to come thick and fast for the Sony Xperia XZ3, which may well show up at IFA 2018 at the end of this week. The latest sneak preview comes courtesy of an image uncovered by retail site MySmartPrice, which looks like an authentic shot of the front and back of the handset – it shows a single-lens rear camera, and a fairly familiar Sony design.

5. The Tesla Semi is really racking up the miles

As per an article in Electrek, and a follow-up tweet from Elon Musk, we know that the prototype Tesla Semi autonomous electric truck is already racking up the miles across the US – without any support vehicles and without the high-capacity Megacharger stations that are in the pipeline. For now, it still has a backup driver on board, just in case.