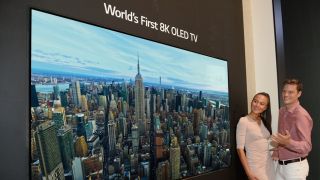 Welcome to our daily roundup of tech news, courtesy of our friends at TechRadar. We've got Sony, LG and Dell news from the IFA 2018 tech expo in Berlin, as well as news on a Bose smart speaker and a rumoured video streaming service heading to the Amazon Fire TV.

The IFA 2018 tech expo gets underway today – or at least the press event part of it – which means we'll see a deluge of new gadget announcements over the next few days. Via a video on its official Twitter account, Sony has hinted that one of those devices might well be the Xperia XZ3 flagship phone – and its press event is scheduled for tomorrow...

Speaking of product launches at IFA 2018, LG just unveiled the first 8K OLED TV to roll off its production lines, for those of you already dissatisfied with 4K. You can't actually buy the 7680 x 4320 resolution panel yet though – there's no word on a release date or a price, but you can expect this to cost an awful lot of money when it eventually does go on sale.

3. Dell has new Inspiron 2-in-1 laptops to show off

Did we mention IFA 2018? Dell is using the event to release updates to some of its most popular laptop lines, and that means the Inspiron range is getting an upgrade for 2018. The latest 8th-generation Intel Core i5 and i7 processors have been added, there's Alexa integration, and some RAM and storage upgrades too. Click below for the full rundown.

4. Amazon might build a free Netflix rival for Fire TV

Amazon already has a streaming service in the form of Amazon Prime Video, but you need to fork out a monthly subscription to be able to access it. New (and unconfirmed) reports in the tech press suggest Amazon is now working on a free, ad-supported service with older TV shows and movies, ready to work on any Fire TV device. It's called Free Dive, apparently.

If you find the Amazon Echo and the Google Home a little on the cheap side, check out the new Bose Home Speaker 500, yours for £399 or $399 – it comes with Amazon Alexa on board, with Google Assistant and AirPlay 2 promised further down the line. As well as excellent audio (Bose says), the speaker also has a small screen for displaying album art.