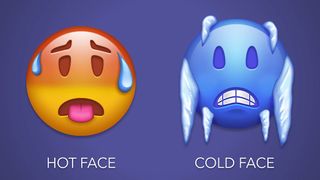 We've got something for everyone in today's round-up of the hottest tech news, courtesy of our friends at TechRadar: rumours about upcoming products from Google and Samsung, a tough new laptop from Panasonic, and a pile of new emojis heading your way.

1. Google wants to stream video games straight to you

Google makes an increasing number of hardware gadgets to go with its software services, but right now it doesn't have a games console. It sounds like the tech giant might want to plug this gap with the launch of a new video games box as well as a streaming service codenamed Yeti – one that would beam games straight to whatever screen you're using. It's all hush hush for the moment though, with nothing official from Google as of yet.

2. The Panasonic Toughbook 20 can take anything you throw at it

The latest in the Panasonic Toughbook line is the new ToughBook 20, which comes with full 2-in-1 functionality, so you can pull off the screen and use it as a tablet without the attached keyboard. As with previous Toughbooks, the emphasis here is on a rugged and protective casing, so you can take this laptop pretty much anywhere you like – just don't expect it to be as small and light as the rest of the Windows laptops on the market.

3. The Samsung Galaxy S9 will have a special slow-mo video mode

Excitement levels are rising as we await the launch of the Samsung Galaxy S9 and Galaxy S9 Plus at the end of the month, and if the latest rumours are to be believed, the phones are going to come with some fantastic slow-motion tricks up their sleeves. Specifically, the handsets are tipped to have special slow-mo modes where the action can be slowed down mid-clip, or set to kick in when motion is detected in front of the rear-facing cameras.

4. Brace yourself: new emojis are coming

Everyone loves emojis right? They beat those old-fashioned words when it comes to expressing thoughts and feelings, and Unicode (the organisation that controls emoji use) has just published its list of 157 new emojis we can expect to see reaching phones and other devices this year. Included on the list of new arrivals are emojis such as hot face, cold face, partying face, a variety of superheroes, a pirate flag, a skateboard and a racoon.

In memoriam: Wileyfox made some decent phones in its time, so we're sad to report that the British smartphone maker has had to shut down operations after going into administration. What this means for people who already have Wileyfox phones isn't clear, but they shouldn't count on any future software updates for their handsets appearing. It turns out it really is as difficult as it looks to compete with the likes of Google and Apple.