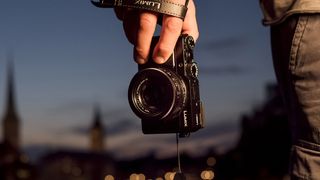 Facebook is trying to stamp out trolls and fake news on its platform, the Google Assistant wants to cheer you up with some good news, and there are new products from Panasonic and Samsung to discuss in today's tech news – all courtesy of our friends at TechRadar.

The original LX100 from Panasonic was responsible for a peak in compact camera sales, combining a large sensor with a high-quality, wide-aperture lens, and now the Mark II is here to get camera enthusiasts excited again. Among the improvements this time around, there's a bump in resolution, and a touchscreen display for more intuitive camera control.

2. Chrome is getting a major visual refresh

If you use Google Chrome for your day-to-day browsing, get ready for the app to look significantly different in the coming days – Google is rolling out a refreshed design across all operating systems, an update to the original Material Design that brings with it more rounded corners, brighter colours, more subtle shading, and numerous other tweaks.

3. Facebook wants to stamp out trolls with a reliability score

Facebook's latest idea in the battle against trolls and fake news: reliability scores for each of its users (including, maybe, you) that indicate how trustworthy they are. The thinking is that people who consistently push fake news and flag it up as genuine reporting will tend to get ignored by Facebook's algorithms, while posts by honest folk get more weight.

4. Get some good news at last from Google Assistant

Finding the daily news cycle a little on the depressing side? Google Assistant can help: a new feature added to the cloud-based AI will respond with a positive story when you say "hey Google, tell me something good". Reports about jobs being created and diseases being fought are included in the feature, which is rolling out in the US first, from today.

5. Samsung could have a massive tablet on the way

Remember the Samsung Galaxy View? The huge 18.4-inch slate was a little too big for many, but according to insider sources, Samsung is now working on a follow-up – though the Galaxy View 2 will apparently only be 17.5 inches corner to corner. If you really want as much tablet screen space as you can get, this might be a device worth watching out for.