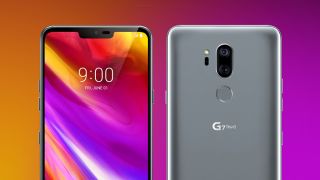 Every day we bring you the pick of the tech news stories making the headlines – and today we've got tales of an Amazon helper robot, the upcoming LG G7 ThinQ phone, a new mesh Wi-Fi system, the latest AI advancements and more, courtesy of our friends at TechRadar.

1. Amazon wants to build a robot for your home

Think of an Amazon Echo on wheels and you're not too far away from imagining what Amazon is reportedly working on: an Alexa-powered robot that can follow you around. Exactly what the robot will do isn't clear – the ironing and dusting would be nice – but sources speaking to Bloomberg say the now-not-so-secret project is codenamed Vesta, with the first domestic bots potentially going on sale to the general public in 2019.

2. See the upcoming LG G7 ThinQ from every angle

If you're eagerly anticipating the imminent launch of the LG G7 ThinQ (scheduled for 2 May) then you'll want to browse through this extensive gallery of leaked images, provided by seasoned phone tipster Evan Blass. The phone gets shown off from just about every angle, so you can see the iPhone X-style notch on the front of the device, as well as the dual-lens camera around the back. In a few days LG should be making the phone official.

3. AI can now fill in the blanks in incomplete photos

Nvidia just unveiled an intriguing new artificial intelligence tool that uses deep learning processes to repair incomplete photos – in other words, if your photo of a castle has pieces missing, the app can produce a pristine copy. It uses computer-generated graphics to fill it what it thinks should be in the gap, whether that's a human eye or half a flying frisbee. It's just a demo for now, but it's a fantastic example of how this technology is developing.

4. The iPhone SE 2 is coming with some iPhone X features

According to rumours currently sweeping the interwebs, Apple is about to launch the iPhone SE 2 upon the world, and the speculation from those in the know is that it's going to come with some iPhone X features – namely a glass back and wireless charging. The bezels will still be in place, so no notch here, but it should prove a decent option for anyone wanting a smaller or cheaper alternative to the top-end iPhones Apple sells.

If you find your existing router struggles to get Wi-Fi into every corner of your home, the new Lyra Trio mesh router system from Asus might be worth a look. Like other similar systems – of which there are a growing number now – it uses several different Wi-Fi broadcasting points to make sure every corner of your house is covered. The system is available now to pre-order for $299.99 for a pack of three (that's roughly £215).