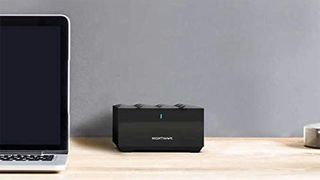 Wi-Fi 6 was designed with the future of routers in mind. As our homes get smarter, we have more connections than ever that need to check in consistently and reliably. Wi-Fi 6 is designed to bring more capacity to a network and even allows for greater speed with a lot of devices. Wi-Fi 6 mesh router systems have come down in price, and the Netgear Nighthawk MK62 is one of the best choices for most people.

Fast enough for most people in a small housing that can blend in anywhere, build your Wi-Fi 6 mesh with the Nighthawk MK62 system.

The Nighthawk Mesh WiFi 6 System from Netgear takes on compact AC-only mesh systems with its compact housing and understated design. Measuring only 4.8 inches wide and 2.5 inches tall, each router has a smaller footprint than a CD case. This compact design makes this mesh system one of the easiest to integrate into a home.

While you do give up some speed compared to the larger and more expensive mesh systems, the AX1800 speeds should be more than enough for most homes. 4K streams should be a breeze, and if you need a few more wired connections, a network switch could be connected to one of the gigabit LAN ports available on each router.

Netgear claims these routers can cover a 3000 sq ft home, and of course, more satellite units could be added down the line. This is helped by compatibility with Wi-Fi Certified EashMesh. EasyMesh is a Wi-Fi standard developed to help ensure future compatibility with mesh products. This is all brought together with Netgear's robust Nighthawk app.

Netgear Orbi Wi-Fi 6 brings the next wave of mesh with fast AX4200 speeds. This is great for large coverage with a lot of devices.

The newest addition to Netgear's Wi-Fi 6 enabled Orbi family is the RBK752 system, which including one base router and a satellite and can cover approximately 5,000 square feet with it's tri-band, six-antenna setup. This Orbi is in line with the older Orbis as far as size and appearance with a two-tone gray and matte white housing. Wi-Fi 6 speeds come in at AX4200, which breaks down to 600Mbps on the 2.4GHz channel and 1200 Mbps on the 5GHz band. The remaining 5GHz channel can operate up to 2400Mbps, however, it's dedicated to the connection between the Orbi units. This speed should be more than enough for the vast majority of home network use including multiple 4K video streams.

Add coverage, capacity, and speed to your Velop mesh with the Linksys MX10 Velop. Wi-Fi 6 and Ethernet keep speeds high.

The Linksys MX10 Velop is just the name given to the two-pack of Linksys MX5 Velop routers. These routers are capable of delivering AX7800 speeds across three Wi-Fi bands. While these speeds are quite high, the wired connection to your modem will max out at 1Gbps, and other wired devices will be limited to the same speed. While this is more than enough for the vast majority of people, it would have been nice to see more wired capability.

Four Ethernet ports and a USB 3.0 port on each unit allow for a lot of expansion. The Wi-Fi 6 Velops are quite a bit larger than the Velop dual-band or tri-band AC mesh routers. Compared to a traditional router, however, the internal antennas help keep the appearance understated.

If you already have a Velop system, there's no need to get rid of it thanks to compatibility with the entire Velop family of routers. The most powerful routers, in this case, the Wi-Fi 6 Velops, should be connected directly to the modem with the older routers providing extra coverage in areas that don't need as much speed.

Even the gamers need mesh

Asus has a great Wi-Fi 6 and mesh solution with software to keep games lag-free. Four LAN ports keep all of your consoles online.

Asus was one of the first companies to make a Wi-Fi 6 router for consumers and quickly followed that up with the RT-AX92U mesh system. Thanks to fast tri-band speeds, these routers can connect with a fast backhaul of up to 4.8Gbps, and each unit has four gigabit Ethernet ports.

Disappointingly, there is no multi-gig Ethernet, but link aggregation can combine two of the gigabit ports for up to 2Gbps internet support. This will be quite a bit faster than most people have access to. Thanks to Asus' AiMesh software, another Asus router can be added in as a mesh point, but you'll need to make sure it has full tri-band Wi-Fi 6 support to get the most out of your network.

I like the more traditional gaming router appearance. The gamer aesthetic here isn't for nothing since Asus included its gaming software to keep ping times low and prioritize game traffic on your network. Gaming and mesh don't normally mix, but Asus has managed to bring the two together with some of the best technology available.

Most people simply don't need much more than gigabit speeds on their home Wi-Fi networks. Luckily, even Wi-Fi 6 mesh systems are available for people that don't need a ton of speed but still want to take advantage of the other advancements. The Netgear Nighthawk MK62 strikes a great balance between speed and features offering expandable coverage and plenty of speed for most people.

Wi-Fi 6 mesh systems are bringing features like MU-MIMO and better handling of multiple connections to your whole home. Not that many devices sold in the past couple of years support Wi-Fi 6, but many new phones are supporting the protocol. Thankfully all of these devices support older versions of Wi-Fi to maintain compatibility with the added benefit of better connections between the base router and satellite units.