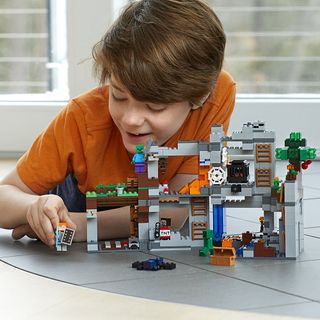 Minecraft is easily one of the most popular video games to ever hit consoles or PC, dropping players into a world that they can build inside of as they explore. While there is plenty to do inside the game, there are also some awesome toys for your kids to play with in the real world. Whether you want plushes or action figures, you have options. However, the absolute best Minecraft toy is the Lego Minecraft Bedrock Adventures which lets your kids continue to build and use their imagination, without requiring a game console to do it.

Minecraft might be a video game, but there are also a wide variety of different lego sets that take the game and bring it into the real world. While different Minecraft lego sets all deliver tons of fun and the ability to enjoy the world without having to be plugged into a video game to do it. The best Minecraft toy out there is the epic 644 piece Lego Minecraft Bedrock Adventures set.

This set lets your child use legos to descend into the bedrock of Minecraft. They'll build a multi-level environment that mimics mining down into the ground. The top of this set has dirt and trees, with ladders that descend down and into the mining levels. While there are grey blocks to denote you have delved underground, your kids will also find a variety of great minifigs to play with. This set comes with a spider, creeper, zombie, two silverfish, Alex and Steve Minecraft figures.

Part of the fun of legos is being able to build and change the environment you are playing in. While sets offer up slightly more structure play, there isn't a single "best" way to set up for Minecraft adventures. Thanks to the modular design, there are a few alternative ways to build this set. This means your kids won't get bored of seeing the same thing every time they want to play.

Overall the Lego Minecraft Bedrock Adventures set delivers tons of fun for any kid who enjoys playing Minecraft. It allows them to use the base of Minecraft while encouraging imaginative play that doesn't involve a screen. It's a great way to let kids enjoy something they love without being always plugged into technology along the way. With tons of pieces, a modular design, and a variety of minifigs to play with, it'll keep your kids occupied for quite a while.

This little green guy stands at 10.5 inches high, making him easy to cart around or crawl into bed with at the end of the night. It's night and soft, making it an excellent option for kids of any age, and it's also easy to clean. With the same face and marking as Creepers from the game, it's easy to see exactly what you're looking at and makes a great soft cuddly pal for your child.

Lego sets offer up a unique way to blend structured and imaginative play. If you think there aren't excellent Minecraft Lego sets to choose from; you're very wrong. The Minecraft Pirate Ship Adventure is a brand new 2019 set that allows your kids to set sail, or investigate a shipwreck. With plenty of small articulated pieces, it will fascinate them as they play.

Minecraft Pirate Ship Adventure is a 382 piece set that lets kids build a pirate ship, skull island, and a variety of small lego people to play with including a zombie. The pirate ship itself is the feature of this set, and for a good reason. It has a full retractable gangplank, cannons that can be flicked and fired, and even a rowboat so that your pirates can make landfall when they want to. It also includes Alex and Pirate minifigs, a zombie, a dolphin, a turtle, and even a parrot!

In the world of Minecraft, you're nothing without the right tools for the job. Try to mine without a pickaxe, or deal with pesky skeletons without a sword and you're going to have a bad time. Mattel's transforming Sword and Pickaxe toys aim to ensure that whatever fantasy world your child is exploring with their imagination, they're always equipped for what they find.

This toy shifts between being a sword and a pickaxe. In both versions, it's made of hard plastic and retains the pixelated look from Minecraft. Shifting between pickaxe and sword is a straightforward affair, so kids can do it all by themselves by pushing and pulling parts of the toy to shift it over. While it is a hard plastic sword, when you switch to pickaxe mode, it has a soft foam tip so that kids can feel like they are mining when it's time to play.

Every Minecraft toy that we've detailed in this list is an excellent choice for creative and fun play. While each option offers up a different experience, all of them are fantastic. However, the best of the best is the Lego Bedrock Adventures Building Kit

This Lego set allows your child to build up a mining world and then explore it. It has a great modular design that lets them adjust what it looks like and comes with a great variety of minifigs to encourage creative play. With over 600 pieces included, it won't get old anytime soon.