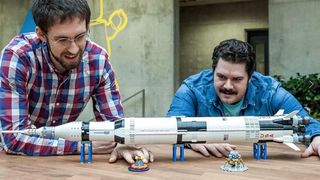 Lego sets deliver a fun way to combine imagination, with the worlds that children see in other games, movies, books, or television series. From Harry Potter to Minecraft, to outer space, there are hundreds of different Lego sets from which to choose. That can make it challenging to find the best ones for your child. While there are tons of options, our favorite pick is the Hogwarts Great Hall that brings the Harry Potter universe to life with part of the castle, and ten different minifigs to play with.

When Harry Potter burst onto the scene all those years ago, it brought magic to children all over the world. While you might not be able to visit Hogwarts in full scale, your child can certainly play there using the Hogwarts Great Hall Lego set. This set includes a variety of minifigs and allows them to build the great hall itself.

The Hogwarts Great Hall is an 878 piece lego set. It includes ten different minifigs: Harry Potter, Ron Weasley, Hermione Granger, Draco Malfoy, Susan Bones, Professor McGonagall, Hagrid, Albus Dumbledore, and Nearly Headless Nick and Professor Quirrell. While they may need help initially building the great hall once it's been put together, there is tons of replay value. That's because it includes bits like house banners, moving staircases, potions room, treasure room, and even magic items with which to play.

You'll also find that this kit is excellent for bringing the magic of Harry Potter to life for any kid who loves books, movies, or games. The Great Hall is easily one of the most significant sets in Harry Potter. With the variety of figures includes, and accessories like the sorting hat, basilisk, and even the ships that bring first-year students to the castle, it's easy to replay out their favorite scenes.

Overall the Hogwarts Great Hall delivers everything that makes lego sets so awesome. It brings a setting that is known to kids to life in the real world and additionally allows them to use their imagination to play out new scenarios.

Lego sets are the gold standard when it comes to toys that help to foster imaginative play. While many of the sets that you can purchase center around a specific theme, there are options if you want to give your kids toys that foster their independent imagination play. The Lego Creative Brick Box is a great option.

This box comes with 484 different blocks in 35 different colors and is waiting for whatever your child wants to build. They can mimic photos on the box to create cars or houses, or make items that exist only within the confines of their little brains. The box is hard plastic and doubles as a great way to store the bricks when not in use. It's also super affordable and won't break the bank for parents on a tight budget.

For many kids looking up to the stars and considering how people would travel off-world is a fun way to engage in imaginative play. 2019 is the 50th anniversary of when America landed on the moon. Now your space minded kid can get an up-close view of the whole Saturn V rocket with this epic 1900 piece Lego kit.

The NASA Apollo Saturn V Lego Kit comes with everything you need to build all three stages of the rocket, the lunar lander, and the lunar module. It also comes with astronaut Minifigures so that your child can play out their dreams of being an astronaut. While this kit is one for older kids, or for parents and children to build together, the attention to detail is stunning. It stands at almost a full meter high when fully assembled, and even includes stands to display the model, and educational information about the lunar landing.

A long, long time ago in a galaxy far, far, away the Millenium Falcon managed to do the Kessel Run faster than any other ship. Manned by the smuggler Han Solo and his trusty best friend Chewbacca, this ship is one of the most iconic parts of the Star Wars franchise. Now, it's in the real world thanks to this gigantic 1414 piece Lego set. This isn't necessarily the best option for young kids, but if your child loves Star Wars, this is the ultimate lego set to consider.

The Millenium Falcon comes with not only all the pieces you need to build the ship, but also six different minifigs, blaster weapons, and electrobinoculars. We suggest that unless your child is on the older side, you turn building this ship into an activity you can share with them. Once the vessel has been built, you can watch them adventure and play with Han Solo, Chewbacca, Qi'ra, Lando Calrissian, Quay Tolsite, a Kessel Operations Droid, and a DD-BD droid.

Minecraft might be a video game, but there is also an impressive lego set that brings the game into the real world. Different Minecraft lego sets all deliver tons of fun and the ability to enjoy the world without having to be plugged into a video game to do it. The epic 644 piece Lego Minecraft Bedrock Adventures set goes above and beyond to deliver tons of fun in a package that kids are sure to spend hours with.

This set lets your child use legos to descend into the bedrock of Minecraft. They'll build a multi-level environment that mimics mining down into the ground. The top of this set has dirt and trees, with ladders that descend down and into the mining levels. While there are grey blocks to denote you have delved underground, your kids will also find a variety of great minifigs to play with. This set comes with a spider, creeper, zombie, two silverfish, Alex and Steve Minecraft figures.

Lego City is full of nifty sets that are based on real places you would find in a city. The three-story fire station is no exception and delivers an excellent way for your little firefighter to fight the imaginary fires that crop up. This set is 509 different pieces and comes with a variety of neat small features for them to enjoy as they play.

This lego set is a three-story fire station and includes a garage, a drone, and an ATV. It also consists of a fire chief, and three firefighters that can douse the flames as other parts of Lego City catch ablaze. Kids can deploy pieces like small flame items, and a fire hose that is capable of putting them out.

Each Lego Set is different and delivers different ways for kids to play and use their imagination. We narrowed down our list using consumer reviews to find the absolute best sets available on the market today. Of course, the best of the best is Hogwarts Great Hall

The Hogwarts Great Hall brings Harry Potter to life using Legos in a way that hasn't been done before. It includes ten different characters as Minifigures, a variety of accessories like the sorting hat, and even includes aspects of Hogwarts like house banners and moving staircases. It's a vast magical set that is sure to capture the attention of your child and allows them to create their own stories with the characters they already know and love.