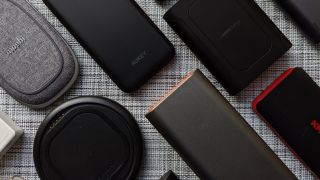 Nothing can turn your technology from state-of-the-art to overpriced paperweight faster than a dead battery, but battery packs can help recharge your tech when life plays keep-away with your power outlets. Power banks used to be big, bulky, and slow, but Power Delivery charging has made things much faster — fast enough to charge laptops, even — and has allowed power banks to get slimmer and better than ever. There are plenty of options in every shape or size, but our favorite is the Anker PowerCore 10000 PD Redux, which is tiny but mighty.

Anker's power banks have been some of the most popular in recent years, and its 10,000mAh PowerCore PD Redux is just about the perfect battery pack for recharging a single phone during a long day at a theme park or as a backup battery you can stow away in a small bag. This is especially true as the Reux fixed the original PowerCore 10000 PD's inconsistencies with trickle-charging smaller devices.

The USB-C port on this compact power bank, about the size of a granola bar, supports 18W PD charging, which should recharge most modern Android phones and iPhones at a good, swift speed. With a PD wall charger, you can recharge the PowerCore in about three hours, which isn't too shabby for a 10,000mAh bank.

The Redux is an upgrade in every way except for one: the 18W output is shared between the two ports while on this model, while on the original, you could charge at 28W output with both ports at their respective top speeds. It's a small loss to get more consistent charging for headphones and other small accessories, but if you charge two devices consistently, you might want to keep scrolling for something else.

Aukey's pack is bigger than Anker's on paper, but I've greatly preferred phone-shaped power banks because with these types of banks you can easily tell where it will and won't fit: if your phone will fit there, this battery pack will fit there. This philosophy is especially helpful when you're charging with the bank and your phone in a single pocket together, as two flat narrow slabs fit better in a pocket together than one flat slab and one stout pillar.

This bank sports two USB-A ports to the Anker's one, and one of those two ports is a QC 3.0 port, which is great news for Samsung owners and those with older phones that may need a power bank to get through the day. The second USB-A port is a more standard 5V 2.4A, while the USB-C port is 18W Power Delivery.

While massive battery packs that can recharge anything and everything have their place — and we'll get to them shortly — the best power bank is the one you have on you. That's why I'm always going to be a fan of these pocket-sized pucks of power that are light enough to throw in your purse on date night or just shove in a side pocket on your way out the door.

Xcentz only has one port on its miniature body — about the size of two lipstick tubes — but that USB-C port offers 18W Power Delivery output for charging your phone at likely top speed. The USB-C input is only 12W, but it still won't take too long to recharge because it's only 5,000mAh. That smaller capacity helps keep the size and weight down, and for most folks, 5,000mAh is really all you need to keep your phone alive a few hours longer on the road.

VIEW AT AMAZON
Best All in one

Battery packs are great, except that you need to remember to charge them, and to bring along cables and sometimes wall chargers, and, honestly, who wants to deal with all that extra nonsense? Ventev lets you leave the cables and the wall chargers at home and place all your hopes and power prayers on one compact companion: the PowerCell 6010+.

The 6,000mAh capacity is enough to charge most regular-sized phones twice — or powerhouses like a Note one and a half times — but that capacity is only half the story. If the power bank starts to run down during an excruciatingly long day, then you can plug the Ventev directly into the wall with the fold-out AC prongs. While plugged in, both the battery pack and phone can charge at the same time thanks to passthrough charging. Unfortunately, it's not a PD charger, so it's not as fast as most chargers on this list.

If you need to recharge a whole family's worth of phones, or maybe you just need to keep your phone alive for a week in the wilderness, then you need yourself a high-capacity battery pack. The PowerCore+ is a perfect bundle for those who need to build up their Power Delivery collection at home and on the go.

This power bank can charge — and recharge — at 45W, which is not only more than enough for phones and tablets: this can also charge most laptops at a decent speed and Chromebooks at top speed. This bundle also comes with a robust C-to-C cable and a 60W wall charger, so that you can be sure you'll recharge the bank at full speed, too.

This pack is just under the 100Wh limit the FAA has on lithium-ion battery packs, but it is above the 20,000mAh limit some east Asia airlines are starting to move to. If you fly domestic, you're fine, but internationally you might want to check your specific airline's limits.

Need a battery pack that will charge your laptop at a good speed, won't die halfway through a long day of video editing, and is sturdy enough to withstand the chaotic black hole commonly known as your gear bag? Zendure is here for you with the A6PD.

This model is on the slimmer side for a 20,000mAh battery pack, sports a rugged aluminum housing, and there are three ports on the side: one USB-C port for 45W Power Delivery input/output, one USB-A QuickCharge 3.0 port, and one Micro-USB port for input charging only. This will charge most Chromebooks at top speed, some MacBooks at a decent rate, and of course, it will charge your phone several times over.

If you need as big a battery as you can get to keep your phones, headphones, and laptop alive across international flights and 20-hour days, Goal Zero is the one to beat. The Sherpa 100 PD Qi is just under the FAA limit to bring on a plane, the PD input/output is 60W, meaning it'll actually charge a MacBook at a decent speed, and it's even got a Qi pad on top for your phone.

Goal Zero is a brand you might not have heard of before — it tends to deal in solar and portable power solutions — but because it's geared towards outdoor tech, you can rest assured this is a battery pack that will not leave you hanging. The Sherpa 100 PD is about half the size (and half the price) of the Sherpa 100 AC, so make sure you grab the new PD model!

There are great banks to be had in every capacity level, but I find 10,000mAh to be the sweet spot where it can charge phones from empty to full 2-4 times but it's still light enough to easily carry in your jeans pocket or a light purse. The Anker PowerCore 10000 PD Redux will fit in smaller pockets while still charging at a good speed and a good capacity, which provides the best of all worlds.

The Anker wins out over the Aukey 10,000mAh bank for a few reasons despite the Aukey having more ports: Anker's banks perform more consistently over time, and its smaller, lighter weight design makes it easier to carry around in a jeans pocket, even in women's jeans that are too shallow for phablet-sized battery packs. It still has a USB-A port for devices that aren't USB-C, but it isn't bogged down with old micro-USB inputs like so many power banks on the market still are.

If you need a larger battery pack that is capable of charging multiple phones — or a laptop, thanks to Power Delivery charging — but you're not willing to spend the big bucks that Goal Zero and Anker demand, the Zendure A6PD still charges at a respectable 45W, comes in a nice size, and still has a spare USB-A port for charging two phones at once.