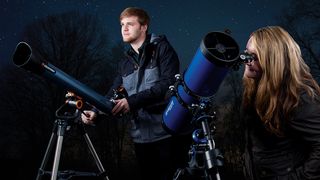 We think there’s nothing more amazing than on a crystal clear night to gaze up at the twinkling stars and wonder what is out there. We can wonder no more though, because with a telescope to hand we can bring stars, planets, nebulae and galaxies to life, and all from the comfort of our back garden.

Choosing a telescope can be tricky. After all, they are expensive, and you don’t want to make the wrong choice. Forget about seeing views through the eyepiece that look like a Hubble Space Telescope image – the light that we see from stars, nebulae and galaxies has travelled many light years, and so they do appear dim at first, but we find that with careful viewing, we are rewarded with better and better views as our eyesight adjusts to what we’re looking at. We also like to dabble in astrophotography, and with the technology on hand today, our images are starting to look much like Hubble’s!

We’ve learned to be wary of small telescopes with plastic lenses boasting 500x magnification. The plastic lenses will not produce a clear image, while their small aperture will not collect much light, and so there won’t be much light to magnify. Instead, we love the telescopes made by some of the more well-known names in the astronomical market, who love astronomy like we do and who are dedicated to producing quality telescopes, which are all highlighted in our choices made here.

The NexStar 6SE is a computerised telescope that makes it easy to observe the planets and deep-sky objects. Its on board database has information on over 40,000 celestial objects, meaning there’s always something to look at. To get started, just use SkyAlign – point it at three bright objects in the sky, press ‘ALIGN’, and your telescope will figure out where it is. Then, use the hand-controller to select any object that you want to look at, and the telescope will take you there. Or, follow one of the pre-loaded sky tours to help you learn your way around the sky.

An entry-level Go-To telescope perfect for the novice astrophotographer

With its five-inch aperture and narrow field of view, the Meade ETX 125 is designed for visual use, particularly for small targets in the eyepiece, such as the planets of the Solar System, the Moon, planetary nebulae and double stars. The Meade ETX is computerised, and has a database of 30,000 objects, and using the hand-controller will direct the telescope to any of them. It comes with two eyepieces, both 1.25-inch Super-Plössls with 9.7mm and 26mm focal lengths respectively. Its compact size, and weighing less than 12kg (including tripod and mount) means that it is quite portable.

Using the elegant Dobsonian design, the Skyliner (called the ‘Traditional’ in the US) combines large aperture with ease of use

The Dobsonian design is a classic, eschewing the tripod in favour of a wooden rotatable base (azimuth) with tilt control via the rocker mount (altitude). A patented tension clutch allows the user fine control over finding objects in the night sky. The design is able to support larger telescopes at relatively low cost. This eight-inch Dobsonian is perfect for visual deep sky observing, the large aperture able to collect enough photons to show you views of most well-known deep sky objects. The wide-field of view will give you the impression of ‘floating in space’. However, the lack of a motor drive means it cannot be used for astro-imaging.

Not all telescopes require giant tripods and heavy mounts. Try out this package from Orion. It’s a 6-inch Newtonian reflector, so it’s got a big enough aperture to capture light from reasonably faint deep-sky objects as well as show the planets of the Solar System in detail, but its small and light enough (around 10kg/23.5lbs) to simply stand on a sturdy table. Despite being a modestly-sized set-up, it can take you to anything in its 14,000-object database courtesy of its Computerised Object Locator, which gives you directions for pushing the telescope to the target, courtesy of a back-lit display.

A premium telescope for the serious astronomical all-rounder

For the dedicated, experienced stargazer, things really do step up a notch in terms of the equipment they seek to use. This four-inch refractor is definitely not for beginners. It comes without a tripod, mount, eyepieces or even a finderscope - the purchaser is expected to already own those things. It’s the quality of the optics that is of interest here, made from special HOYA FCD100 extra-dispersion glass, to avoid chromatic aberration – the colour fringing often found to occur around objects seen through refractors. The carbon-fibre tube reduces the telescope’s weight to just 4.2 kg (9.3lbs) making it eminently portable for taking on trips to your local dark sky site, star parties or even to astronomy holidays abroad. It’s ideal for either visual observation or astrophotography.