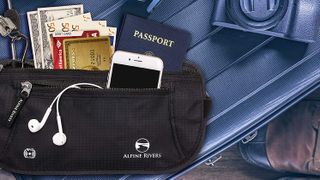 As unfortunate as it sounds, you simply can't trust everyone and that's perhaps even more the case when you're embarking on your travels. That's because travellers run a higher risk of being targetted since they're more likely to have their belongings on them. It therefore pays to keep valuables in a hotel safe but if you really do need to carry them around, then you'll need some extra protection.

Money belts remain a great way to conceal important items such as your cash and cards. If they're big enough, they'll also hold passports and documents so think carefully about what you'll want to have on your person as you travel because it will effect how useful a money belt will prove to be. The best ones will offer a good number of pockets with at least one that is more hidden than the others. This way, you should be able to access the most important items without exposing everything you have.

Of course, a money belt can also draw attention to yourself and indicate that you are perhaps an insecure traveller which much to offer. For this reason, it's worth having the minimal amount of cash with you but it's also worth considering just how obvious your money belt is going to be. There are some which look like real belts that carry little in comparison to the bulky ones but they offer a security trade off.

Here we look at a range of money belts to suit different needs and budgets but, for travellers who spend most of their time on the road, all should prove useful and potentially save you from a lot of future hassle.

There was a time when you'd only have to keep your notes, coins, cards and Travellers Cheques on your person to be sure they weren't being stolen. With the advent of contactless payment, however, you also have to be on your guard against wireless theft.

Thieves have worked out that they can skim the radio frequency identification (RFID) chips in credit and debit cards using scanners which they position close to bags and pockets. This money belt offers great protection since it it made from RFID blocking material and it also comes with six blocking sleeves for your credit cards and one for your passport.

Aside from that, there are two front-zipped pockets and a large compartment to the rear. It's also suitable for fitting most smartphones and it's water resistant too which should ensure everything inside is as safe and sound as it could be.

A light, inexpensive belt that shouldn't cause a sweat

This inexpensive money belt offers RFID protection and water resistance but its small size means it should fit well beneath your clothes. The three pockets – one large and two small – will ensure you can separate less-often used items from those which need easy access and because it has a lengthy adjustable strap, it should fit around most bodies large and small.

The bag itself has a length of 32.5 centimetres and it is just three millimetres deep, weighing 63.5 grams, which means it has been designed to be comfortable and light. There's also a mesh to the rear which claims to absorb moisture. As such, it shouldn't irritate your skin which will certainly be a consideration if you're looking to hide it away on a hot day.

RFID blocking material
A solid, budget item
Not the best of looks
Only two pockets

Although it's not the coolest-looking money belt around – the khaki or shiny black nylon colouring along with the Amazon Basics logo plastered across the front does it few favours – it's not exactly bereft of features, especially given it is made with RFID blocking material.

It's also made to fit beneath your clothes which means its styling may not be that much of an issue and, because it has a width of eight millimetres with a breathable mesh panel on the rear, it shouldn't prove too unbearable or obtrusive when you're wearing it throughout the day.

Indeed, you can gain handy access to one of the two pockets by a zip running across the length of the belt and there's an adjustable strap to give it as snug a fit as you like. Since it's an Amazon Basics product, it also comes at a wallet-friendly price.

Taking the idea of a belt to its literal meaning, this item is indistinguishable from the everyday object you'd use to prevent your trousers from falling down. The benefit of this obvious: unless thieves looks very closely, they're very unlikely to know that you're concealing cash within.

Folded money is inserted via a zipped compartment on the inside of the belt but, because its height is just 3.81 centimetres, you'll find stashing credit cards in there will be nigh-on impossible. It's also hardly going to be the most attractive way to get at your money on-the-fly since you'd have to start unbuckling!

But that is, perhaps, missing the point. If you keep a small amount of cash in your pocket, you can have the rest of your money stashed away in secret which is great if you're at a festival or another situation where any others means of securely storage of your money isn't really an option.

Designed for when you go running

Stashbandz is a money belt created for runners so if you're going to break some sweat on your travels, then this may be the one for you. Created to fit across the top of your shorts, it vertically stretches to 15 centimetres and that gives it ample space for phones, passports, money, keys and even a flask.

Coming in various sizes, there are four wide pockets in total and the zippers for each one of them is hidden beneath a flap that makes it far harder for a passing pickpocket to undo them and dip their hands in – if they can catch you, of course. The belt is also made of spandex fabric and it will soak up sweat while claiming not to cause chafing.