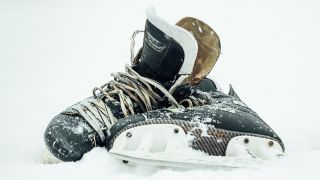 Not all ice skates are the same. On the one hand, you have those that are best suited for figure skating and, on the other, those that are designed for hockey. Which one you decide to go for depends on how you believe you'll be using them. For recreational use, hockey ice skates will be fine, but if you want to perform some fun moves, figure skates may be preferable.

You can tell the difference between the two by looking at the blades. For figure skates, the blades will be longer and they will have a short rear tail and a toe pick at the front. Hockey skates, meanwhile, are curved to the front and rear. The next set of differences work across both types of skate and they will depend on whether you are an occasional or expert skater.

Recreational ice skates will have a PVC sole and synthetic linings as well as a simple lacing pattern so that you don't become bogged down with the ins and outs of getting the boots on and off. As you go up the ladder, you'll find they are made of better materials, with more advanced blades and fastenings but do, in all cases, make sure that they fit snuggly and are not too tight. You always want good ankle support.

In general, don't go for an ice hockey skate if you want to be jumping and spinning. Likewise, don't opt for the lighter ice hockey boots if you want the precision of quick turns. There is actually another type of ice skate – those made for speed, which have longer and thinner blades – but they're rather specialist and certainly not for newcomers.

The K2 F.I.T. ice skate has been designed for comfort so that ice skaters can take to the rink for hours without their feet becoming painful. Indeed, by using an award-winning “Softboot” design, it has all of the benefits of a hardshell boot in terms of its accuracy while being lighter and forgiving.

The ice skate incorporates a warm brushed lining and, since it also uses water-repellent material, it should keep the feet dry too. There's a plastic coating on the shaft that lends extra strength and stability. It not only uses traditional lacing with a fastener, but it also looks pretty damn cool.

One of the problems when buying any type of shoe for young boys and girls is that they will soon grow out them. With the Lake Placid Monarch ice skates, you can get extra wear since they can be adjusted to suit a growing foot with the pull and locking of a lever. They also provide a secure fit thanks to a locking buckle, power strap and laces.

The boot we are looking at here is aimed at girls, but there is an ice skate available for boys as well. In both cases, the boot has been made to be warm, with a woven lining. The sole is also waterproof and the blade is made from stainless steel. It will need to be sharpened before it is used, however.

Jackson Ultima is a popular brand of ice skate, inspired by Don Jackson who was the World Figure Skating Champion in 1962. These kids figure skates are one of many different boots and they are aimed at female beginners, enabling them to work on their basic steps, gliding, stopping, forward crossovers and more.

The boots have a synthetic lining with a vinyl/mesh foam backed tongue. The uppers are vinyl coated and they have a PVC outsole, with the Mark II blade attached with screws. These chrome-finished blades are made with a harder steel construction and allow for a longer edge life.

We do love to see an injection of style in the products that we seek for inclusion and this ice skate is simply stunning. It looks like a designer shoe atop a stainless steel blade, with the print described as “rooster” and a couple of additional design twists for a sportier look.

The laced boots have padded reinforcements as well as a cushioned textile insole. The ankle is also supported. Bear in mind that the blades don't come sharpened out of the box, but if you're after an ice skate that looks good and will help you to stand out on the rink, then it's definitely one to consider.

Although they're not suitable for figure skating, these ice skates will go down a treat for recreational use. Made by American Athletic, which has been around since 1959 and supplies many an ice rink, the soft boots are made for comfort and stability with warm foam padding and multilayered ankle support.

They also look mighty fine. The sporting design comes courtesy of a mix of grey and black styling with white sticking and a mix of textures. Skaters should also find them easy to slip on and off thanks to a speed lacing loop system. They are secured using a strap for added safety.