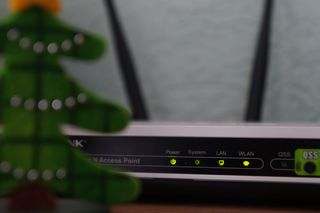 A large house or office full of devices requires a heavy-duty router, especially when you figure in gamers, 4K streamers, and those who still want a wired connection. Our favorite is the Linksys EA9500 with two 5GHz bands with speeds up to 2,166Mbps.

The Linksys EA9500 Max Stream has just about everything you want from a router. You get three bands of Wi-Fi, 4 x 4 MU-MIMO, and a ton of ports to connect your wired devices. A 2.4GHz band with speeds up to 1,000Mbps is perfect for older devices, and two 5GHz bands at up to 2,166Mbps support 4K streaming and seamless online gaming. Toss in some extra features, like device prioritization and parental controls, and you have a strong multipurpose router.

The router's 4 x 4 multi-user, multiple input, multiple output (MU-MIMO) capability allows for constant streams of data to up to four of your capable devices, rather than the usual method of rotating data delivery. This is especially important for gamers and anyone looking to stream high-bandwidth video.

Eight Ethernet ports on the back of the router ensure you'll have no problem connecting all your wired devices, and eight antennas broadcast a strong signal throughout your home or office. For a powerful router that can handle pretty much anything you throw at it, definitely give this one a thought.

The NETGEAR Nighthawk X8 has three Wi-Fi bands — one 2.4Ghz at 1,000Mbps and two 5GHz at 2,166Mbps — to best deliver the internet to all your devices. Each band has four data streams available, and the router will automatically assign devices to the best band to maximize speed. 4 x 4 MU-MIMO capability ensures data is received as efficiently as possible, and the six Ethernet ports on the back allow plenty of wired connections.

Many people don't need a router as powerful or expensive as the Nighthawk X8. Enter the TP-Link Archer C7. It has two Wi-Fi bands — one 2.4GHz at 450Mbps for 802.11a/b/g/n devices and one 5GHz at 1,300Mbps for 802.11ac devices — to better connect all your laptops, phones, and consoles. Two USB ports on the back of the router allow you to connect external storage for media sharing across all devices in your home. This router has plenty of bandwidth for streaming movies, sharing files, and playing games.

The Linksys Velop Tri-band Whole Home Wi-Fi Mesh System is a next-generation mesh-style router.  If you're not familiar with mesh routers, they use multiple access points to provide fast, reliable coverage for larger, more irregular, and more challenging environments. Velop isn't as cheap as Google or as small and pretty as eero, but it's combination of performance and features makes it not only Amazon's choice, but Apple's choice for mesh routers.

The ASUS RT-AC3200 has very good range, even with the 5GHz band, but it's really all the extra monitoring features available through the ASUSWRT interface and app that sets it apart. You're looking at 600Mbps speeds on the single 2.4GHz band and 1,300Mbps speeds on each 5GHz band for blazing transfer, and devices will be automatically assigned to the correct band for maximum performance. Six antennas help with that long range, and four Ethernet ports allow you to connect your wired devices.

The best overall router right now is the Linksys EA9500 Max Stream, but the NETGEAR Nighthawk X8 is a close second. A great budget option is the TP-Link Archer C7, gamers will want to check out the Linksys WRT32X, and a relatively cheap router with excellent range is the NETGEAR R7000P Nighthawk. If you want a router with a robust user interface and in-depth app, check out the ASUS RT-AC3200.