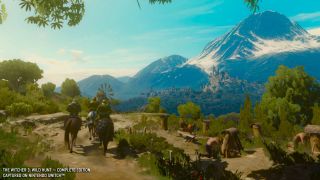 Role-playing games deliver a different experience than many other games you can expect to find on the Nintendo Switch. Instead of a game that revels in violence, you're put into the world of a character and expected to fulfill an epic quest of one kind or another. Whether this means roving the wilds chasing down dragons, finding the story behind 8 different travelers, or bringing a farm back to its former glory, Nintendo Switch gives you some great options. Out of all of them, The Witcher 3: Wild Hunt delivers the best experience with a vast world to explore, fantastic gameplay mechanics, and a story that will capture your imagination.

Eight very different people come together for an epic quest across the world. Each one has their own skills, personality, and goals, but they've come together somehow. It doesn't matter why they're working together, only that you're willing to help them succeed at the tasks that drive them. Eight characters, eight stories; this is Octopath Traveller.

In many ways, JRPG games have lost the popularity that they once held with American gamers. Octopath Traveller attempts to recapture the magic of games like Chrono Trigger with retro graphics, a cute story, and time-based combat systems. While they aren't entirely successful due to a disjointed story, there is a certain charm in Octopath Traveller that will speak to many longtime RPG fans. A lot of this is simply due to the graphics and sound design which work well together to invoke a sense of nostalgia, making it feel like you've played the game in the past, even when it is brand new.

Each of the eight characters has their own narrative that brings them to life. You'll play out joy, tragedy, betrayal, and victory alike as you game through the stories of a pious cleric, a murderous dancer, a idealistic trader, and more. Combat is a significant part of gameplay and it's a mixture of older time-based mechanics and newer tweaks that add to the gameplay to keep it from feeling stale. You'll want to capitalize on the weaknesses of enemies and think strategically to win out in battles, especially since you'll be stuck waiting for your action gauge to refill itself.

$7.59
View at CDKeys
Prime
$12
View at Amazon
$19.99
View at Best Buy
See all prices (34 found)
824 Amazon customer reviews
☆☆☆☆☆
Hundreds of hours of gameplay
Tons of different quest lines
Great customization options
Gameplay is still buggy
Occasional frame rate drops are frustrating
Combat can be hard to get the hang of

Skyrim was originally released way back in 2011 to third-gen consoles, since then it's gotten a number of different updates that brought it to current gen systems. Those updates and tweaks mean that one of the best open world RPGs to ever be released is available on Nintendo Switch, and it looks better than ever before. Aside from some small issues with frame rate drops, it's easy to fall into a world that includes icy peaks, green forests, big cities, and small towns alike. It's also a truly massive game with hundreds of hours of content that includes optional dungeons, side quests, main quests, and even quests that are specific to certain professions like being a thief or an assassin.

Additionally, there are tons of awesome customization options. The game is exactly what you make of it. This starts at character creation where you decide exactly what you want to look like and it continues on from there. Weapons, armor, clothing, sidekicks...all of it is up to you. Later in the game, you'll even acquire houses which can be decorated, and if you so choose, you can take a partner or have kids. Everything comes together to deliver a world that feels alive and open to any possibility you stumble across.

$7.99
View at Amazon
$21.99
View at Newegg
$29
View at Walmart
See all prices (12 found)
442 Amazon customer reviews
☆☆☆☆☆
Cute graphics
Tons of options for how you manage your farm
Fun story
Gameplay can become repetitive
Planning ahead is required

Stardew Valley is a simple story: your grandfather has left you a farm in the town of Stardew Valley. Upon arrival, the farm has seen better days with an overgrown field and ruins. In fact, the entire town seems to be in a bit of a slump, but with some help it can return to being an excellent place to live and work.

The main gameplay of Stardew Valley is about bringing your farm back to it's glory days. You can plant a variety of different plants for each season (with the exception of winter) as well as taking advantage of foraging, mining, and fishing. As you play, you'll meet the many other people in town, go to town events, and maybe even fall in love.

Starting out requires clearing away rocks, stumps, trees and grass so that you have room to plant your crops. Once you've gotten that handled you're able to explore the town, discovering places to fish, people to befriend, an old community center filled with sprites and even a cave to be explored.

The choices you make affect gameplay directly. Depending on your choice your farm will grow and change. Gameplay emphasizes choice in how you manage your farm, and it uses simple graphics to do it. By collecting wood and stone, you can build expansions to your house, along with a barn and chicken coops. You can raise animals, plant different crops each season, and even create an orchard of fruit trees. The decisions are all yours to make.

Geralt of Rivera, the legendary Witcher returns for the third installment in the Witcher series. This time he's hunting down his protegé Ciri before The Wild Hunt manages to get to her. He'll have to team up with old allies, confront old enemies, and find her if he wants to save her. Welcome to the massive open-world that is The Witcher 3: Wild Hunt.

This game is beyond gorgeous with tons of tiny details packed into every frame. Crisp environments, well-designed enemies, and town teeming with people bring this world to life. It's also a massive game, and at no point do the graphics suffer because of this. There are hundreds of options when it comes to quests, hunts, locations to explore and people to talk to. There are gigantic cities filled with people, along with small towns that pop up out of nowhere. It's easy to spend hours on the game and barely touch the main storyline.

Combat has always played a major role in The Witcher series, and that hasn't changed. Regular humans and small beasts don't offer up many challenges, but the realistic combat becomes more challenging when hunting down spirits or griffons. It does take time to get used to, but the combat is realistic without being punishing to new players.

Role-playing games allow you to inhabit a world that is completely different from the life you live. This might mean farming or adventuring, and Nintendo Switch offers up a variety of different games that can get just about any gamer excited to play. Out of all the options our favorite is The Witcher 3: Wild Hunt.

This massive open-world game delivers a stellar story, great mechanics, and a world just waiting for you to explore it. With the new Witcher TV show on Netflix, this world is more real than ever and has hundreds of hours of content just waiting to be discovered.