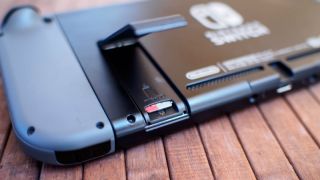 There's no beating around the bush, the 32GB of onboard storage included on the Nintendo Switch is just not enough. To put that into context, if you were to download Pokémon Sword or Shield onto your Switch, that would take about 10GB of space — that's almost a third of the space on the Nintendo Switch for just one game! With the sheer volume of fantastic games in the eShop that can be downloaded directly to your Switch, storage can quickly become an issue. Not to mention, all the save data, screenshots, and video clips add up over time. If you are looking to put a little extra space on your Switch, then you are going to want to expand your storage with a microSD card.

Samsung's very-highest-of-the-high-end microSD card isn't cheap, but you're also getting a winning combination of performance and storage capacity. This is the best card to get if you know you'll be downloading most of your Switch games from the Nintendo eShop, as it will not only hold a lot of games but will load those games faster than most other cards!

The SanDisk Extreme has blazing fast read speeds of up to 160MB/s (in certain scenarios) and write speeds of up to 90MB/s, capable of handling 4K video, high-res photos, and large files without issue. If you have more to spend, you can even get a 1T version if you need performance and all the storage.

This high-quality microSD is perfect for those who primarily download digital games. It has a huge storage capacity, so you'll be able to store game data for several titles. It also comes with a lifetime warranty so you can feel safer about your purchase. It features a fast read rate and performs beautifully to give you a smooth gaming experience.

If you want a nice high storage capacity without breaking the bank, Samsung's 128GB card is a good option. Spending around $20 gets you a staggering amount of storage, and with pretty fast read speeds to boot — up to 100MB/s. It's about the lowest price we've seen for a 128GB card and a great way to ensure you have lots of space for all the goodies you want to have on your Switch.

This Samsung EVO Select card won't break the bank, but it offers a great balance of speed and capacity. This 64GB card should be enough to get you up and running with your Nintendo Switch and is big enough to hold a decent number of installed games. The card also comes with a full-sized SD adapter, which makes it extra useful if you ever need to use it in anything that isn't the Switch.

If you wouldn't mind picking up a microSD card to use on multiple devices, you're probably concerned about speed and less concerned about size. The Lexar Professional 1000x uses UHS-II flash memory and boasts read speeds of up to 150MB/sec. This card is great if you want a little extra storage just in case and aren't planning on installing a lot of games from the Nintendo eShop.

Not everyone's storage needs are the same, but speed, reliability, and performance are things that matter for every Nintendo Switch. Screenshots, gameplay videos, and game data get stored on these drives, once you've exceeded the internal storage on this console. Make sure you've got the best card for your needs, and you'll be happy with the way your Switch performs for quite a while. Keep in mind that there are several different size options, so take a moment to decide what microSD card size to get for your Nintendo Switch

If you're going to buy a ton of games digitally, that probably means you're going to want to go all out and pick up the Samsung EVO+ 256GB. It gives you plenty of space to download multiple games from the eShop. If you want something a little less expensive, the Samsung EVO Select 64GB is a great option. It's inexpensive and gives you a decent amount of storage. Just make sure you purchase a microSD card with enough storage space to suit your gaming needs.