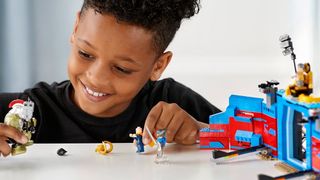 You've seen them save the world and get decimated by Thanos. Now, why not reenact the battles for yourself? With these LEGO Marvel sets, you can triumph against evil and undo the snap that eliminated half of all life in the universe. Here are the best LEGO Marvel sets you can buy.

Thor: Ragnarok was a triumph for many reasons, one of which was its gladiator clash between Hulk and Thor. Comprised of 492 pieces, this LEGO Marvel set will let you smash Thor to pieces for the entertainment of the Grandmaster.

Explore's Doctor Strange's Sanctum Sanctorum in the depths of New York City as you protect an Infinity Stone from getting into the wrong hands. With over 1,000 pieces, this LEGO Marvel set includes a 3-level design and a handful of minifigs, including Spider-Man, Iron Man, and Doctor Strange.

Replay the battle on Titan as Thanos attempts to complete the Infinity Gauntlet. Comprised of 674 pieces, this set is the ultimate boss fight as Iron Man, Star-Lord, and Gamora put the hurt on the Mad Titan. But it is he who has the last laugh.

This posable Hulkbuster building kit features an opening cockpit, bashing arm function, and gun turret with a ball shooter. It's an accessible 375 pieces and includes four characters from Infinity War, including Bruce Banner, Falcon, Proxima Midnight, and an Outrider.

One of the best story arcs in Infinity War involved Thor creating Stormbreaker. You can recreate the entire sequence in Thor's Weapon Quest, a 223-piece building kit that includes an escape pod and three minifigs, such as Thor, Rocket, and Groot.

This sprawling 807-piece set lets builders recreate the fight from Captain America: Civil War when the Avengers were divided over the Sokovia Accords. Not only does the building kit include minifigs for Captain America, Iron Man, and War Machine, but it also features an Ant-Man microfigure in his Giant-Man form.

This ATM Heist Battle building kit features an opening door and an exploding window for ultimate action. But have no fear, because your friendly neighborhood Spider-Man is keeping an eye on criminals trying to earn a quick buck. With 185 pieces and multiple minifigs, this set will keep you fighting crime for hours.

LEGO Marvel The Milano vs. The Abilisk

In the opening scene of Guardians of the Galaxy Vol. 2, the Guardians battle against a ferocious alien known as the Abilisk. While the LEGO version doesn't look quite as scary, it still looks wonderfully weird with his vibrant pink design.

All it takes is 358 pieces to complete Black Panther's Royal Talon fighter, a prestigious and regal vehicle that shuttles him around Wakanda. This building kit includes minifigs for Black Panther, Nakia, Ulysses Klaue, and Killmonger, the latter of whom is one of the MCU's best villains.

Protect Wakanda in this 416-piece building kit, which features a Wakandan wall, opening gate, and rotating turrets. The battle of Wakanda was one of the most crucial in Avengers: Infinity War, making this set an important part of any collection.

Explore the Quantum Realm in this building kit from Ant-Man and the Wasp. It features 200 pieces and three minifigs, including Ant-Man, The Wasp, and Ghost. The Quantum Realm could play a huge part in Avengers: Endgame, so this LEGO set shouldn't be missed.