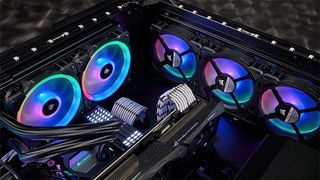 With a wide variety of PC fans out there, how can you know which ones will keep your system nice and cool? Are you fed up with the inside of your desktop PC being so hot it may as well have opened a summoning portal to the very depths of fiery hell itself? Keep cool and carry on quietly with our favorite fan out there, the Noctua SNF-S12B Redux. It's suitable for being used as both a CPU fan and a case fan as long as you don't mind the lack of lighting. It provides excellent airflow and operates almost silently - once installed, you'll never even know that they are there!

This budget offering from Noctua is guaranteed to satisfy any case related cooling demands that you may have. It sports an optimized airflow blade that has been specifically designed to reduce noise and shift as much air as possible in any given space. Wherever you put this fan to use, it should impress. These fans are quiet; I can't state that enough. They will only ever reach a maximum of 18 decibels while under load. To put this in perspective, leaves rustle at around 30 decibels - under no circumstances will you think that your desktop is about to fly away.

The ultimate in RGB fans, these fans can be configured individually through Corsair's customization software. Any setup that you can imagine can be configured, from the standard rainbow configuration to your favorite sports team's colors. If you can think of it, you can do it with these fans. They are also reasonably quiet and proficient in cooling any case as well as being very, very bright so much so that you may want to use sunglasses! They can be mounted both ways as they also look good from behind.

These budget LED fans from Thermaltake are guaranteed to put some color into your case and still leave your bank balance feeling relatively healthy. Available in both 120mm and 140mm versions, these fans also come in some unusual colors such as yellow and orange which are not often seen in a single color LED configuration. The airflow is more than acceptable; they come with anti-vibration mounting pads built-in. Even while operating under a reasonable load, they don't generate much noise either.

Unlike the cheaper Noctua fans, this premium fan also comes with a ton of accessories. You get integrated anti-vibration pads, fan screws, extension cables, a radiator gasket and a y-cable which can be used to run two fans on the same motherboard header. As expected, it also runs incredibly quietly. It's capable of creating a mini typhoon in terms of airflow - if you need as much cooling as a jet engine, then these are the fans for you.

In comparison with the Corsair RGB fans which are without a doubt the brightest RGB fans on the market, these fans offer a similar but far more subtle effect which is not likely to blind you in the middle of a gaming session. These fans are beautiful and will lend a really refined look to any case out there. The downside is that while they do provide a reasonable amount of airflow, they are not particularly on the quiet side.

The best fan overall is the Noctua SNF-S12B Redux due to its sheer power and almost inaudible operation when it comes to cooling in any scenario. The aerodynamically designed blades will not let you down no matter wherever you choose to put them to use.

These fans are like ninjas, so stealthy and silent, you'll never know they are even there. That said, they still pack quite a powerful punch in the airflow department and also come with a six-year warranty direct from the manufacturer. There is no RGB included in these fans. But there is absolutely nothing stopping you from putting some [LED Lighting Strips](/best-led-light-strips){.nofollow} in your PC case.