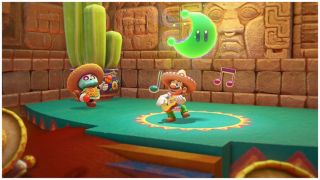 The Nintendo Switch has plenty of awesome adventure games for you to play through. From games best played with friends to journeying through different worlds, there are a variety of different adventure games sure to pique your interest. Of all of them, Super Mario Odyssey rises to the top of the pack delivering the best Mario game that has ever been released with tons of worlds to explore, and hours to spend stomping on Goombas.

When it comes to Nintendo games, there are few characters or franchises that are as well known as Mario. He appears all over the place, but his platforming adventures have been with gamers now for more than 30 thirty years. Super Mario Odyssey is the next big chapter in Mario's adventures and it delivers an absolutely stellar experience that delivers the gameplay you already love with a massive amount of content, including new updates and tweaks to gameplay.

Super Mario Odyssey starts with the same old story; Princess Peach has been kidnapped by Bowser who intends to marry her. This time, however, you have a new partner in Cappy, a magical cap who's sister has also been kidnapped by the King Koopa.

Cappy is the major new change to Mario's gameplay. By throwing him at enemies, you can possess them and their abilities to Mario's benefit. It means that you can take control of Goombas, frogs, and even a T-Rex. You'll also end up using Cappy as a weapon instead of just stomping enemies, and as a jumping pad during gameplay.

Super Mario Odyssey is massive. There are more than 16 different worlds to explore, and even after you finish the main campaign there are new levels to unlock. Players do this by collecting power moons. While some moons are easy to find,e but getting some of them can be pesky. With over 500 moons in the game, there is a lot of replayability in trying to hunt down each and every one.

One of the best parts of the game is that it never attempts to make itself more serious, or more difficult than it needs to be. It is great for kids and adults alike. With a difficulty that never punishes you, it's easy to sink hours into Super Mario Odyssey without having to put the game down in frustration. When you do inevitably die, you're not tossed back to the beginning of each level. Instead, there are generous checkpoints where you can respawn for a measly 10 gold coins.

All together, Super Mario Odyssey breathes life back into Mario's platforming adventures. New features like Cappy's possession add new layers of fun, while call backs to earlier games will sate your nostalgia. With so much content, it's easy to keep playing long after you've finished the main campaign. It makes Super Mario Odyssey the absolute best adventure game available on Nintendo Switch.

VIEW AT AMAZON
Best with Friends

Super Smash Bros is what happens when you take a game built around having all of your favorite video game characters smash each other to smithereens. It's a button-mashing, better-with-friends explosion of chaos and fun. Smash Bros Ultimate has more content in one package than the franchise has ever managed before. We're talking more than 50 characters, over 100 different levels, a robust campaign mode, and more.

Controls in Smash have always been pretty simple and that trend continues. You use the control stick and two buttons to move, and launch attacks. Each character gets access to special moves that can be triggered, but the basics don't really change from character to character. This means you can jump in and start having fun even if you're never played a single moment of Smash before.

No health bars in Smash ever show up, which makes it easier to feel like you have a chance even when your bestie is beating you right off of the platform. Instead a percentile shows up above your character, the higher this number goes, the more likely it is that you can be ko'd and knocked completely off screen.

There are actually 108 different maps in Super Smash Brothers Ultimate. This means there really is a level that will delight any player, and they include previous exclusives like Paper Mario which was only available on 3DS. Along with so many levels, there are also a whopping 74 different characters to choose from when playing. You'll need to unlock most of the playable characters by gaming with the initial 11 characters that are available at the start.

Combining a nostalgia fueled 1930s animation style with breakneck boss battles, Cuphead is a platformer unlike any other. To begin with, Cuphead is just plain hard from beginning to end. There is no learning curve here, and you may curse the game more than a few times as you play.

Cuphead starts out with graphics that look like a love letter to Max Fleisher's art style of 1930s animation. Bright watercolor backgrounds, big eyes, juddery movements make it almost as fun to watch as it is to play. Along with the graphics, you get an excellent score to cement in the atmosphere of the game with jazz, ragtime, and big band music showing up at different points of gameplay.

Now, when we say Cuphead is hard, it is with a capital H. We're not kidding in the least. There are no save points during levels, no way to regain lost health ,and with levels that can take over an hour to beat, it is not messing around. Boss battles happen constantly, along with streams of enemies. And if you thought opting in to co-op mode with a friend would make it a bit easier, you are sorely mistaken.

Cuphead is a must play for platformer fans who are hardcore enough to overlook the difficulty issues though. It's fun, it's fast-paced, and it excels as what it is: an unapologetically difficult platformer.

The Onion Kingdom is in trouble again, and only one thing can save it. A kitchen filled with chefs who are ready to take on any challenge and serve up the food that the zombie army, the Unbread, has ordered! With new features, and plenty of zany fun, Overcooked 2 serves up fun alone or with friends.

In Overcooked 2, you and up to 3 more friends can all play as chefs in the same kitchen. Your goal is to prepare and serve the dishes that the Unbread are asking for. Along with many of the dishes from the first  game, there are nine new recipes you'll need to master and a variety of small gameplay tweaks that make a big difference. The throw option makes it easier to get food started, or on the burner.

The dishes you need to make will appear in the upper right corner of your screen, and once you serve a dish, another one will appear. Many dishes require several steps, and some ingredients can be used on multiple food items.  Likewise, not every ingredient will need to be cooked, which means you'll need to keep an eye on what is being requested, as well as communicating with your team members to ensure that nobody makes the wrong item.

If making the food wasn't crazy enough, the levels are just as chaotic. Some of them require you to use portals to get around, run along moving walkways, or deal with other chaos. At times, you might feel like Overcooked 2 is more of a platformer than a quick-play game, but it never gets less fun.

Yoshi's Crafted World takes a different gambit when it comes to delivering a fun platformer that anyone can enjoy. With adorable graphics, an outfit system, and a play style that is never so difficult that you want to throw your controller across the room in frustration, it really is a fun experience.

There are 40 different levels to play through, and each one has a different vibe. What remains the same is the absolutely adorable backgrounds and environments. You'll see items that look handcrafted like signs, and it's clear that many background items are hung in place with string. It adds to the cuteness factor, and definitely plays into the personality of Yoshi games.

One of the more amusing features of this game is the outfit system. There are 170 different costumes that you'll use in-game currency to purchase through gachapon capsule machines. You never get handed duplicate outfits; there is always something new to try on. Aside from being adorable, the costumes give you armor, protection players from any dangers Yoshi might face. So, if you're looking for the most challenging way to play, feel free to collect outfits...just don't put them on.

It's very easy to roll through the 40 levels that are part of the game, even when you try to up the ante. The real fun in Yoshis' Crafted World is going back in to find all of the collectibles that are hidden throughout each level. Each level hides 20 red coins, along with several smiley flowers. You'll also be able to pick up specific missions that send you back to the level to find hyper-specific items. If you're a completionist, you can expect to play most levels at least 2-3 times before you manage to get that sweet 100% score

Nintendo has managed to amass an awesome number of adventure games that you can take advantage of. These are the best adventure games available today on Nintendo Switch. With more to come, who knows what's in store for Nintendo! While every game here delivers fun, one does rise above the rest to deliver the most excellent experience possible.

Super Mario Odyssey is the next great Mario game. With the world and characters you already love, new features like Cappy really add new aspects to gameplay. Even once you finish the campaign, there is more to see, explore, unlock, and enjoy. If you want the best adventure on the Nintendo Switch, this is the one to play.