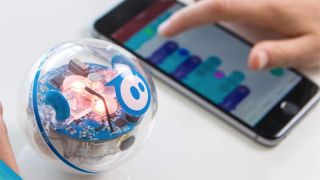 Robotic toys deliver up a fun and unique way for kids to play. It's a combination of imagination, and technology that has the unique ability to get kids playing as they build and learn. There are a variety of awesome robotic toys out on the market, but the best of the best is the Sphero SPRK+. This robot has tons of different abilities, lives in a hard shell and teaches your kids to code as they play.

A robot in a sphere gets you rolling

Go from beginner to pro as you use this spherical robot to learn how to program!

Trying to learn how to code or program used to be quite frustrating. That's changed, and now you can use an app on your phone to do it by playing with Sphero SPRK+. This little robot inside a sphere is scratch-resistant, water-resistant, and can teach you how to program whether you're just getting started, or already a pro. You can run programs from the app, or using your new know-how to build your own instructions telling Sphero what to do

Programming comes in three forms, and you can use Javascript, draw and drive commands, or scratch blocks that tell Sphero how to respond. The way the app is set up, there is a progression in learning, so your kids are never confused about what comes next. What they'll learn gives them a solid foundation of STEM learning that they can bring to the classroom as they go to school.

Command your robot to follow a specific path, drive through a maze, and plenty more. With the Sphero Edu app, there is plenty to learn and have fun with in the process. Sphero has a variety of programmable sensors inside its hard shell, including LED lights, a  gyroscope, and an accelerometer. Since your robot lives in a hard shell, you can even send it swimming across water, which means there are tons of options in how and when your kids play and learn.

Overall the Sphero SPRK+ blends fun and learning in a way that will pay dividends down the line. It starts with simple coding techniques and then slowly introduces more advanced concepts that make STEM learning intuitive for kids to learn. If you want a great robot that also teaches about STEM, then the Sphero SPRK+ is the bot to check out.

Kids can exercise their imagination to build the bot of their dreams!

Most robots come already assembled, but that isn't the case with the Zoob Builder Zoob Bot. This beginner robotics set is made to allow kids to construct their own robots, with only their imagination dictating what they can or can't do. With pieces that snap together, it enables kids to build the robot they've always wanted and then watch it zoom around the room.

The Zoob Builder Zoob Bot has sixty separate pieces: 49 clip together pieces, one light-up Zoob piece with batteries, two wheels, two wheeled motor assembly, and four tires. It also comes with directions so that your child's first robotic attempt has some help to get a rolling start.

Twist to tell it where to go

Finding fun robot toys for your toddler is a reasonably straightforward process. The Code-a-Pillar Twist stands out by letting them have fun and learn early coding and problem-solving skills at the same time. This toy has five segments and a motorized head with small dials along its back. Kids can turn the dials to tell it which way to go, making for hundreds of possible directions.

The Code-a-Pillar uses bright colors and sounds to be as attractive to small children as possible. They'll be able to figure out which segments tell their Code-a-Pillar which direction to go and you can help them to navigate small mazes around the room. There are a few downsides to this toy though. Namely how noisy when it gets going, and the fact that it quickly picks up hairs and fibers which can muck up the internal mechanisms.

Remoking is your robot sidekick

Sing, dance, and talk to a robot that can respond with this adorable little yellow friend.

Not all robots are silver and gray contraptions that look like people or move around by walking. The Remoking Robot Toy is a little yellow bot that moves around on wheels and responds to both touch and voice commands. It's not unusually large which makes it a great option if you want a toy that won't take up too much room, and it has plenty of different functions for your kids to fall in love with.

There are five essential functions that this toy has. It can sing and dance, which involves it spinning in cute little circles or singing to you. Remoking will also respond to voice commands, and if you use the button on the front of the robot, it can record your voice to parrot phrases back at you. Touch induction lets it respond when you pat it on the head as well. It's an adorable little friend that kids will love to hang out with, and at a great price point, it won't break the bank either.

Learn to code as you teach your Droid new skills through fun missions.

Yes, little inventor, this is the droid you are looking for. Your child will start by putting together their very own droid and then learn to code it. The Star Wars Droid Inventor Kit helps to get kids interested in stem and coding by using Star Wars as a vehicle to do it.

This droid uses a smartphone app and block-based coding to tell the droid how to behave. With more than twenty missions for kids to take advantage of, they'll teach their droids plenty of different skills and even program a personality into it. They can also drive their droid around, wave to use to the force to get it rolling or watch as it navigates and manages not to run into anything in the process.

There are plenty of awesome robot toys on the market, and we've tried to outline the best of the best here for you. That means everything from building your own bots, and robots intended for toddlers to inventor kits that have you creating and programming your very own Droid. Out of every option, we've outlined the best of the lot is the Sphero SPRK+.

This robot comes in a durable hard shell that protects all of its components from shock, water, and accidental collisions, making it hardy enough for kids to play with. Your child will learn about coding as they play, starting with block-based coding and eventually graduating to javascript. With tons of options for play like completing mazes, this robot is built to get kids excited about STEM learning.