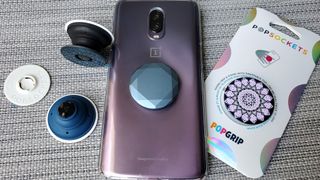 As smartphones get bigger and more selfies are crucial, Popsockets became a must-have. Now you can stabilize your phone without getting that dreaded cramp in your pinky finger.

If you like it, then you shoulda put a ring on it

While PopSockets are more prevalent, popular, and diversely designed, I have to confess that the Spigen Style Ring 360 (formerly known as the Style Ring POP) will always have a special place in my heart and on my phone cases. The 360 is more functional than PopSockets, which makes it a better grip for a lot of users that can see beyond PopSockets' cutesy designs.

Ring grips are awesome because you only need one finger to use them, as opposed to needing at least two with the PopSockets. The 360 also allows you to flip it over and hang your phone off the back of your hand when you need both hands to carry something like a food tray or grocery bags. Call it an oversized bling ring, but I drop phones way less when I use a 360 than when I use a PopSocket I have to "Live long and prosper" pinch at day.

The 360 can allow your phone to sit flat on a tabletop, and a magnetic plate is hidden in that flat back so that you can use it with magnetic car mounts, too. Of course, that plat inhibits wireless charging, but metal grips almost always interfere with that anyway. Thanks to the 360-degree rotation of the base and the 180-degree hinge on the ring itself, you can use it as a kickstand in landscape or portrait mode on most phones so long as you don't stick it to your case too close to the bottom.

While plastic grips like PopSockets can potentially last a lot longer than metal grips like the Style Ring 360, whose bearings and hinge will inevitably wear out over the course of several months. I have had some 360s last over a year, and others had the bearing wearing out within six months. It depends on how heavily you use it and how heavy your phone is.

GrabTabs are available in over a hundred styles, works with Qi charging without disassembly, and is easy on your fingers.

This loop grip is all-plastic rather than metal like the Style Ring 360, with the loop sliding out along a grooved track from flat to loop to kickstand modes. Speck's grip is nice and thin, allowing it to work well with wireless chargers and let your phone sit flat and stable on a tabletop when you're not using the grip.

The GrabTab is much larger than a PopSocket or Style Ring 360 — in fact it's the size of a credit card — but at least Speck takes advantage of its wide canvas and offers up over a hundred GrabTab styles, including an awesome Pride collection that allow you to jazz up a boring case with a fun GrabTab.

The only problem I've run into with the Speck GrabTab over the last couple of months of use is that while the adhesive back can allow it to be moved between devices or cases, they're more prone to breakage during transfer. The groove that the GrabTab slots into for kickstand mode also wears out pretty quickly, but Speck's been making improvements that I hope will help with this.

Scooch's phone grip can be a little awkward to those with smaller fingers, but its kickstand is second to none for productivity.

This snappy silver/black grip can serve as a kickstand, a phone grip, and either a standalone car mount or a mounting plate for a magnetic mount thanks to the bistable metal spring inside — the same kind you saw in your old slap bracelets or your metal tape measure. That spring is insanely durable, which means that unlike a Spigen Style Ring or Speck Grab Tab, the Scooch Wingback will definitely last you years and years.

While the actual in-hand grip with the Scooch isn't quite as natural for smaller fingers, it's easy to get the hang of and its kickstand is far superior thanks to that springy metal back. It may wobble in portrait mode from time to time while swiping through matches on Tinder; it won't slowly sink and flatten the way portrait kickstands on most phone grips will.

The angle it produces is high enough to easily reference notes on your phone while typing on your Chromebook, as I frequently use it for, and the spring is easily snap flat or out with one hand. I'll also confess I sometimes bounce my phone in my hand by the spring of the metal tape because it's just so satisfying.

What's not to love about this stretchy grip

This bowtie-shaped grip plays well with a wide variety of cases and hand sizes, and it comes in dozens of fun designs.

Plastic and metal grips can last a long time, but they can also be hard to grip for hours and hours on end if you're a power-user. That's where fabric grips like the LoveHandle come in. This adorable little bow can help you avoid wearing out your fingers pinching a PopSocket or slinging a Style Ring, and since it's an elastic fabric strap, it's available in so many cute and adorable styles.

Of course, fabric can have its own pitfalls: elastic wears out over time, especially if you have a habit of yo-yo-ing your phone on your finger when you're bored like me. Fabric can also pick up stains and smells from spilled coffee and greasy, sweaty fingers, so you'll want to take care to keep your hands and your LoveHandle clean. This is also one of the few phone grips on the market not to have any kickstand ability at all, but that just means it's doing one thing well instead of trying to do two things poorly like many phone grips.

For years, thousands of users have relied on the Style Ring to keep their phone safe in hand, and stable in kickstand mode.

This was my first phone grip, and it's still one I like coming back to every now and again because, despite its bulkier profile, the original Spigen Style Ring works remarkably well. Available in six colors, this all-metal phone grip features a squared-off bottom edge to its ring, providing a far more stable kickstand in landscape and portrait than round grips like the PopSocket.

The ring rotates on a central post, and while it won't let your phone sit flat on a desk like the Style Ring 360, the classic Style Ring's central post seems to last slightly longer before wearing out. Metal grips like these can lead to sore fingers for some people, but I've never had much trouble with it.

Best For The Car

Get the best of both worlds

This odd-looking phone grip combines the best features of a metal grip with the comfort and adaptability of a fabric loop.

When it comes to phone grips, you can find plenty of mounts that are Qi compatible and plenty that are magnetic enough to work with car mounts, but it's rare to find one that can support both. However, that's exactly the balance Ghostek strikes with the Ghostek Loop grip. A plastic base sticks to the phone and then locks in the main module, which features a metal plate for car mounts, a sturdy fabric loop for gripping your phone tightly, and a fold-out landscape kickstand.

It's an impressive combination to find in a single mount, but the style is definitely one that you'll either love or hate. The loop here isn't elastic, so you don't have to worry about it stretching out like the LoveHandle, but the fabric can still absorb funky smells from sitting in your sweaty pocket.

Like new PopSockets PopGrips, you can swap Ghostek Loops out should you want a new color or just to give your favorite loop a rest, but there aren't nearly as many styles available. It's also much easier for a base and loop to clash since so many of the Ghostek Loops have unique colors for the plastic.

Grip your phone and your cards tight

This phone grip comes attached to a stick-on wallet, complete with a folding flap to ensure your cards and cash stays put.

Phone grips tend to monopolize the back of your phone, and if you're used to keeping a stick-on card slot back there for your work ID or credit card, good news! You can get stick-on wallets with phone grips attached. Sinjimoru makes a wide array of these card pouches, including a couple of models with elastic phone grips on the back, but the Sinji Pouch B-Flap is the best of the bunch right now.

Despite the rather bland name, this grip comes in one of five warm colors like ruby red and autumn gold. The pouch has room for up to five cards or cash, and the elastic strap can be used with one to four fingers slipped through it, whatever is the most comfortable for you. Like the LoveHandle, the elastic here can wear out over time, but some users have also reported seams busting after a few months, as well, so if you tend to be hard on your tech, you might want to opt for a metal or plastic grip instead.

While there are about as many phone grip styles out there as there are case styles out there, PopSockets remain the most popular because they work well, last a long time, and with the newer swappable PopGrip style, they're both easier to upgrade to a new style and use with Qi wireless charging.

PopSockets come in hundreds upon hundreds of styles, including Poptivism styles that benefit specific charities of just about every type you could imagine. Whether you want to swap out for PopTops that highlight your Disney fangirling or support your team on game day, there's probably a PopSocket for that. Another useful quirk of PopSockets is that they can double as fidget toys to help keep me from spacing out during staff meetings.

If you prefer a phone grip you can hook a finger through rather than having to pinch the PopSockets' plastic accordion, the Spigen Style Ring 360 is a great ring grip that works well as a kickstand, too. When I need a hand free, I can just swing the ring around and wear my Galaxy S10 like the biggest bling ring ever as I carry drinks or food back to the booth.