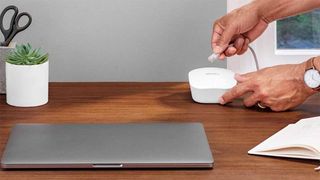 Mesh Wi-Fi kits are a popular way for people to rid their homes of network dead spots. Whether you have a large place or a small place with thick walls, connecting a few satellite Wi-Fi points to the main router will spread the signal evenly. Why not just grab an extender or a more powerful router? You certainly can, but extenders don't usually work in unison, and powerful routers can be just as expensive as one of these mesh kits. If you're interested in setting up a mesh network, here are the standouts of the current mesh network kits on offer.

The eero offers a sleek, minimalist design, and it can be had in several configurations. Three eeros offer maximum performance and wired backhaul. eeros are compatible with not only the eero Pro units and eero beacons but also previous generation eeros, making expansion a piece of cake. Beamforming improves reception, MU-MIMO, and dual-band Wi-Fi serve your modern devices, and you get real-world speeds up to 240Mbps on the 2.4GHz radio and 600Mbps on the 5GHz radio.

Nest Wifi brings the Google Wifi line of mesh routers into the future with much faster AC2200 Wi-Fi speeds. Speeds are kept high with four data streams at 5Ghz and two more at 2.4Ghz, allowing for strong dual-band connections. Compatible with Nest Wifi points and Google Wifi routers, Nest Wifi can make a strong mesh with plenty of expansion options. WPA3 security is a step ahead of the competition, and MU-MIMO and beamforming keep connections efficient and strong as you move around your home.

Bang for your buck

Considering you get a three-pack of Deco nodes at this price, it's likely the best option for anyone who wants to save some money but nevertheless has a large space to cover in Wi-Fi. The Deco M5 offers speeds up to 400Mbps on the 2.4GHz band and 867Mbps on the 5GHz band, and Ethernet backhaul is an option thanks to Ethernet ports on all nodes.

The Orbi RBK50 is an excellent mesh Wi-Fi choice for any large home with a lot of wired devices, as the router has three, and the satellite has four free Ethernet ports at your disposal. A wired backhaul is an option for better performance, but there's also a dedicated 5GHz band for wireless backhaul. Enjoy theoretical speeds up to 400Mbps on the 2.4GHz radio and 866Mbps on the 5GHz radio, and enjoy MU-MIMO connectivity for your modern devices.

All of the above mesh Wi-Fi kits can and will extend your network into the hard-to-reach spots of your home [better than a standard router](/best-wifi-router), but you might still be wondering just where to start.

eero provides one of the easiest and most complete mesh options with the standard Eero routers offering speeds fast enough for pretty much any web browsing including 4K streaming. If you do more with your connection, including video work or simply downloading and uploading large files, you can go up to the eero Pro for faster supported speeds. You can even use the eero Pro and its Beacons to upgrade your existing eero mesh setup thanks to eero keeping all of the routers compatible.

If you'd rather not spend as much on a mesh Wi-Fi system, TP-Link's Deco M5 brings a three-node setup for a relatively affordable price. You still get excellent performance across 2.4 and 5GHz radios, and thanks to Ethernet ports on all nodes, wired backhaul is an option for improved performance. TP-Link says this setup is good for about 5,500 square feet, so if you have a large home with plenty of people living in it, you should immediately benefit from what the Deco M5 has to offer.