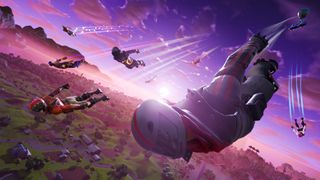 Epic Games' Fortnite has become a gaming, and cultural phenomenon buoyed significantly by the Battle Royale craze, but also its colorful and cartoonish style. With such a meteoric rise, it's only fitting that Fortnite has clashed with Funko Pop!, another pop-cultural phenomenon that tends to be colorful and cartoonish. If you're looking to celebrate your love of Fortnite, we've got great Funko Pop! suggestions for you.

The Brite Bomber outfit is rare in the land of Fortnite. The colorful skin is part of the Sunshine & Rainbows set, which always stands out on the battlefield due to the character's bright color palette. The Funko Pop! features an appropriate pickaxe and ostentatious sunglasses.

Reach for the skies

This Raptor test pilot outfit features an Air Force design, so it's perfect for people into the military aesthetic. The legendary skin features an old-timey leather jacket, yellow gloves, and a yellow mask. The Funko Pop! figure perfectly captures the skin for fans who love playing as the Raptor.

This is another legendary skin and one of the more unique designs in Fortnite. The Love Ranger resembles a cupid with stone wings and a statuesque design and this Funko Pop! replicates the look beautifully, with its clashing gray and pink color scheme.

Out of this world

Part of Fortnite's Space Explorers set, the Moonwalker skin features an astronaut outfit complemented beautifully by some truly stylish sunglasses — because astronauts need sunglasses when flying close to the sun.

This military-themed skin features camouflage pants, a camouflage sleeveless shirt, and a green scarf to complete the look. The Funko Pop! displays the uncommon outfit very well, complete with a pencil and notebook.

Show your holiday spirit with the Merry Marauder skin, which looks like a gingerbread man come to life. The Christmas-themed outfit looks absolutely terrifying as a Funko Pop!, so put this on your desk with caution.

If you thought the Merry Marauder was the stuff of nightmares, the Black Knight is even more terrifying. The Legendary skin is among the most popular outfits in the game thanks to its jet-black armor, which can strike fear into any opponent.

Don't let the cuteness deceive you

Fortnite's Cuddle Leader skin is the furthest thing from being cuddly. The pink bear looks like it has been through its fair share of difficult hibernations, which translates well to the Funko Pop! It's partly cute but mostly scary.

Easily one of the most recognizable Fortnite skins in existence, the Skull Trooper will get you into the Halloween spirit no matter what time of year it is. The Funko Pop! features excellent detail and a scythe to complete the look.

Not quite the end

Omega features an all-black skin accented with neon red flourishes. The character looks like he's straight out of a comic book, which makes this Funko Pop! particularly cool, because the figure has awesome crossover potential.

Go where no one has gone before

The Dark Voyager skin features a pitch-black spacesuit straight out of a science fiction horror film. The helmet features a dark visor, while the suit has orange accents, giving it a great look both as a skin and as a Funko Pop! figure.

King of the dinos

The Rex skin in Fortnite looks menacing, and the green color makes it hard to spot among the landscape. The Funko Pop! figure, on the other hand, looks totally adorable and not at all like a threat despite its mouthful of razor-sharp teeth.

This legendary skin is both ostentatious and dangerous, with a gold robe and a fox-like mask. It's flashy, but it's also threatening, so don't get close or else the pink lightning particles will do some serious damage.

You don't want to mess with anyone with the Ragnarok figure sitting on their desk, because you know they mean business. With incredible attention to detail, the Norse warrior wears a terrifying skull mask and a bone-crunching pickaxe.

Don't cross paths with the Raven, because there's no telling what kind of spell they'll cast. The Funko Pop! figure features a feathered coat, neon pink eyes, and a hood, which casts the character's face in darkness.

Go ahead, play with your food

This nightmare-inducing skin looks as if a company mascot went rogue. The crazy smile; the way it's holding the pizza cutter; the colorful but unkempt outfit. The Tomatohead skin is all kinds of wrong, yet buying one is somehow all kinds of right.

With a black and gray military camouflage design, the Havoc skin is among the coolest in Fortnite — and it looks fantastic as a Funko Pop!. It features black boots and gloves, an ammunition sling, and a full face mask, so you can keep your identity concealed.

A flash to the past

With tough military boots, cutoff sleeves, and a neon hairdo, the Sparkle Specialist looks like a character out of the 1980s. If you want your desk to shine, Sparkle Specialist's outfit will add plenty of style while making you nostalgic for the good old days.

Much like the Rex skin, the Tricera Ops skin translates differently to the Funko Pop!. Whereas the in-game skin looks fierce and indestructible, the Funko Pop! looks cute and friendly, like a young child playing dress-up — not that there's anything wrong with that. The figure is nicely detailed and features a nice, vibrant color.

Straight from the comic books

With neon green hair, a pink hat, and a ballerina skirt, Zoey looks like someone out of a DC comic. The skin looks great as a Funko Pop!, with stylized boots, peppermint accents, and a lollypop for a pickax. The figure is almost too sweet to look at.

A nod to the Amazon

Essentially an homage to Wonder Woman, the Valor skin looks absolutely incredible as a Funko Pop!. Featuring blazing red hair and intricate armor, Valor will inspire you to tackle any obstacles ahead, whether it be an enemy squad or a lengthy term paper.

What kind of treasures does the Loot Llama hold? The colorful piñata is a rare find but worth the trouble, especially for players who need a jolt of crafting materials. Bust it open and gain an edge on your opponents with this fun Funko Pop! rendition.

Move to the rhythm

Suit up and select the DJ Yonder cosmetic outfit, which was introduced in Season 6 of the Battle Pass. With a Daft Punk-inspired helmet and colorful attire, DJ Yonder will bump the music as you romp your way through a Battle Royale.

If you're a Fortnite fan, you'll instantly recognize these skins, which show an excellent range of creative designs from astronauts to holiday-themed figures. The skins, which range from cute to horrifying, translate very well to the Funko Pop! figures.

The Dark Voyager stands out as one of the best, thanks to its stealthy design and immaculate attention to detail. The coy thumbs up is also great for a jolt of happiness. Thumbs up to you, too, Dark Voyager.

If that figure is a little too stealthy for you, consider the Brite Bomber or the Cuddle Leader, which feature vibrant designs that will add pop to any room.

Before you drop into your next match, outfit your desk or shelf with a Funko Pop! Fortnite, and build your way to a Victory Royale!