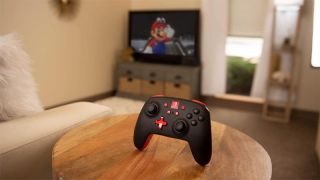 To get a better grip on your favorite Nintendo Switch games, you really have to have a good controller. There are dozens of options to choose from and they all have different advantages. We've compiled a list to help you choose the best of the best for your needs whether you want something wired or wireless.

This officially licensed controller is the accessory of choice for many serious gamers. It has a built-in battery allowing you to play wirelessly for roughly 40 hours before needing another charge. This is the longest battery life of any controller we saw. And yes, it also comes with a USB charging cable and charger. When plugged in, it takes roughly 6 hours for the controller to reach full power. If you charge it between uses you'll likely never run out of juice.

The textured handholds fit beautifully into your hands allowing better control during intense gameplay. This controller has motion controls, something you definitely want when playing Fortnite or The Legend of Zelda: Breath of the Wild. It also has built-in Amiibo functionality, so you can use your favorite figures while playing. The HD rumble ability adds to your gaming session by reacting to in-game events.

The one thing this controller is missing, as with most other Nintendo Switch controllers, is a headphone jack. You will not be able to plug your headphones or gaming headset into it.

These are arguably the most beautiful wireless Switch controllers on the market with over 6 different colors and themes to choose from. While it isn't as powerful as the Pro Controller, it is cheaper and offers most of the functions you want. Using Bluetooth and two AA batteries, you can play Switch games wirelessly for up to 30 hours. An LED comes on to warn you when the power is getting low.

The controller feels good in your hands and responds to motion controls. It gives you an edge when playing against other players since there are two additional buttons on the backside that you can assign actions to. As with most Nintendo Switch controllers on the market, you cannot plug in your headphones.

This is a wired version of the GameCube style Switch controller officially licensed by Nintendo. It comes with a 10-foot cable to give you more room to move around when playing. Unfortunately, the cable is not a USB and as such does not detach from the controller.

The D-pad has been enlarged and additional buttons have been added from the original GameCube controller making it easier to use. You can choose from five different designs and their corresponding colors, including Zelda, Mario, Luigi, Pikachu, and Princess Peach.

Part of what makes this controller so inexpensive is the lack of motion controls, vibration, and Amiibo functionality. It's a very basic option for those who don't want to spend too much on a GameCube-style Switch controller.

This fun controller is perfect for fans of the GameCube. It's similar to the GameCube's controller, but the D-pad and shoulder buttons have been enlarged from the original making them easier to use. Additional buttons have also been added so there are no missing functions for the Switch. This controller uses Bluetooth to operate wirelessly. Two AA batteries allow it to work for up to 30 hours. Should the battery get low, an LED indicator lets you know.

The motion controls are helpful when playing games like Breath of the Wild where you need to use a bow and arrow or locate a tower in the distance. However, it does not vibrate nor does it respond to Amiibo. On the plus side, there are different colors to choose from so you can find the one you like best.

This is the perfect controller for the longtime Nintendo fan as it looks like the original Super NES controller. Using Bluetooth and an internal battery, you'll be able to play wirelessly for up to 20 hours. Admittedly this battery life is shorter than the rest of the controllers we looked at, but it shouldn't be a problem if you charge it between gaming sessions.

This controller was made to work with a variety of systems, but it works beautifully on the Nintendo Switch and offers all the buttons you need. It even features rumble vibration and motion controls so you can play any Switch game without feeling hampered.

Since it was designed for use on more than one system, it doesn't feature Amiibo functionality. Like the rest of the controllers on this list, there is no headphone jack.

We determined that the best overall Nintendo Switch controller is the Pro Controller. It features motion controls and HD rumble making it a good choice for most action RPG and battle royale games. The Amiibo functionality allows you to use your favorite figures from the couch without having to reattach the Joy-Cons. It also has the longest wireless battery life of any other Switch controller on the market. The only thing it's missing, as with most other Nintendo Switch controllers, is a headphone jack.

We spent over 18 hours evaluating Nintendo Switch controllers to determine, which ones to put on this list. We looked at convenience, customer reviews, price and special features. There continue to be more and more accessories coming out for the Switch so we'll keep looking to see what other controllers we should add.